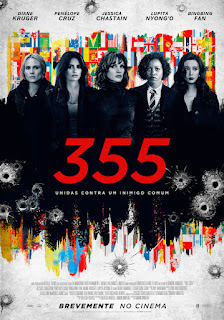 Girl power.  It’s front and center in this spy thriller that spans agencies in the U.S., the U.K., Germany, and China, with stops in Marrakesh, Morocco and Shanghai—but it begins in Bogota, Colombia.  Someone there has come up with the ultimate in hacking—a tool that can tap into any digital system, public or private.  And, of course, hackers around the world are out to get their hands on it.

Much is made about gender politics in the film, as well as geopolitical forces, and to back up the former we get a very cheeky crew:  Jessica Chastain as Mace, Lupita Nyong’o as Khaddijah, Diane Kruger as Maria, and Penelope Cruz—a psychologist(!)—as Graciela, a reluctant player who gets pulled into the drama after she is sent to intervene with a friend who is an agent (Rodriguez).

All these actresses are top-notch, and convey the characters’ personalities expertly, showing intuitive skills and emotional strength along with physical prowess.  Individually as well as a group, they are a highlight in the film.  As a surprise standout—not only for her sheer presence as a character, but also as a surprise element in the plot—is Bingbing Fan.  She is a mysterious figure who appears at a critical time.

As is the predilection of current filmmakers in the action genre, there are far too many hand-to-hand combat scenes in The 355 for my taste—scenes that are usually shot in dim light so that it’s hard to follow the moves exactly.  Although these are generally presented as the means to highlight the hero’s/heroine’s strength and caginess, too many such scenes cause the viewer to distance from the story with dialog that sounds contrived rather than real.

The film can be praised for making a valiant effort to show women who are initially dubious toward one another becoming emotionally close, with some moving from utter lack of feeling to having some semblance of empathy, but the turns are a little too pat to come across as being realistic.  An example is Kruger’s character Maria from Germany being shown as rather cold in the beginning; then, as a presumed result of her interaction with the other female characters, she becomes more personable…almost.

In thinking about the audience for this movie, I imagine that males will see it as a “chick-flick” because of the brutal blows that many male characters take in the hands of female characters.  But it’s not rom-com by any means.  The relationship between the Chastain and Stan characters—however contrived it may be—is not romantic at all, even though I think it is meant to be by the writers.  This is probably because it comes across as so implausible.

Maybe the only audience for this movie are female fans of action movies regardless, or perhaps for females who get some satisfaction from their own “giving it to the man.”

Cyber crime is shown realistically as a threat of world-wide proportions that can affect most of us; but the enactment of fighting against it in this film is less impactful.