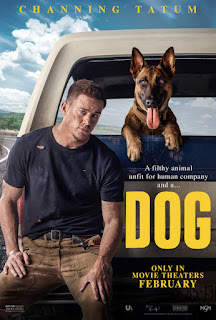 Army Ranger Briggs (Tatum) is messed up with head trauma and PTSD after his service in Afghanistan.  He’s begging to re-up, but can’t get permission from his supervisor.  He makes such a pest of himself, the captain sends him on a mission, and if he completes it successfully, Briggs will get what he wants.  How much the officer has insight into the value of his charge is unclear.  At any rate, Briggs is supposed to take the Army Ranger dog named Lulu that belonged to his fallen brother Riley to the man’s funeral down in Arizona, where the dog is to be honored for his exemplary service.

Before Briggs leaves for Arizona with dog in tow and during the trip, we get a picture of the man, as well as the dog.  He knows nothing about dogs or the power of persuasion, so he is in for a sometimes brutal trip, trying to use his bluster and macho personality to get the dog to behave and obey him.  Lulu can attack at any time with her sharp teeth and boxer-like paws.  She protests mightily to being left in the car and will run away the first chance she gets.

On  the road, Briggs decides he needs breaks and tries to use his usual means of entertainment—going to bars, carousing, and hitting up women with little more success than he has with Lulu.  He runs into a heap of trouble, but somehow along the way, he meets people who want to help him.
And along the way, he begins to realize that he should listen to them, even if some are suspicious of him, practice Kundalini yoga, are psychic and downright kooky.  To his credit he can be personable and make friends easily.  Perhaps the most helpful is when he and Lulu are beginning to develop some rapport, and Briggs rewards her by driving by the house where Lulu’s brother lives.  The dogs recognize one another right away, and the caretaker of Lulu’s brother has many tips for Briggs.
Briggs encounters other obstacles—some really scary, some really comical—on his way and one wonders whether he will ever make it to Arizona and the funeral.
The beauty of Dog is in witnessing Briggs’ gradual transformation of character and to see some of how Lulu and the helpful people they meet play a part.
Channing Tatum’s gifted acting draws the viewer into the drama, making it a real experience that is instructive as well as touching.  He knows exactly how to make the character he is playing charming, annoying, playful, contemplative, disgusting, and bright enough to get himself out of any scrape.  Strong support is provided by his fellow actors, Kevin Nash who plays a brute, his psychic wife played by Jane Adams, and others.
This is both Reid Carolin’s and Channing Tatum’s directing debuts, but it comes across as being directed by someone more experienced.  The soundtrack by Thomas Newman heightens this film’s value.
And you thought a car trip with kids was trying!  Get a look at Lulu!  It’s amazing how she and the main character are able to make her therapeutic.
Grade:  B By Donna R. Copeland
Posted by donnarcopeland at 5:34 AM