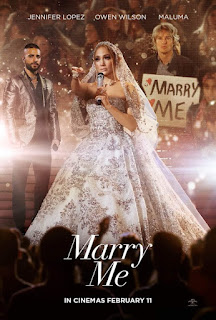 Marry Me is the sweet kind of comedy many are drawn to.  Unlikely events transpire with a few worrisome moments, the main characters are likeable, and the plot gradually thickens to bring the show to an end.  Jennifer Lopez as Kat Valdez, a wildly popular singer plays the role beautifully and convincingly throughout.  It’s fun for the average viewer to get to go behind the scenes and get a peek at the life of a celebrity—the perks, as well as the insufferable publicity.  I imagine that the character Kat may be based on the actress herself, at least as she is currently regarded.  Earlier, she had a reputation for being a diva, but she may have been forced in that direction in order to achieve what she has as a Latina woman.

The same might be said for Lopez’ costar, Owen Wilson, who is usually seen to be a laid-back guy with a somewhat wry bent to his personality and the characters he plays.  They’ve both acted in a number of rom-coms, so are experienced in the genre’s comic timing, mixture of sadness and goofiness, and pulling of the heartstrings.  I wouldn’t have expected there to be much “chemistry” in their attachment, but that does begin to surface as the characters get better acquainted.

John Bradley does a great job in being Kat’s manager, showing expertise in negotiations, going with the flow, and riding out the abrupt changes in plans.  This character is always Johnny-on-the-spot, providing instant cash, reservations, or whatever practical items are needed.  Bradley is skillful in having his facial expression show exactly what he is feeling inside.

Marry Me is successful in achieving what I presume was intended, an entertaining show with dashes of insight and soulfulness.  Directed by Kat Coiro, it holds the viewer’s interest and amusement.

When a celebrated pop singer is found to be betrayed right before her planned on-air wedding, she comes up with a spur-of-the moment solution to her problem.

Posted by donnarcopeland at 8:17 AM