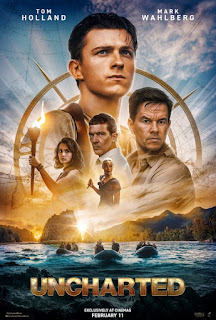 Uncharted, because most of the story is in uncharted water—and lands—in both a literal and figurative sense.  It involves an elaborate scavenger hunt, sometimes in elegant settings, sometimes in the tiniest and darkest of places.  It’s filled with formulaic twists and turns and contrived “appearances”, many of which are expected by the viewer if not the characters.
There were five writers involved (Rafe Judkins, Art Marcum, Matt Holloway, Jon Hanley Rosenberg, Mark D. Walker), bringing to mind “too many cooks in the kitchen…
I guess it’s supposed to be a joke when one character after another says, “Trust me” and “Don’t you have faith in me?”  When of course they are double-crossing one another time and again.
The script starts out charmingly(?) when two brothers in an orphanage are attempting to steal a map on the wall when they are caught by a nun.  We’re supposed to be touched when the older one, before being taken away, says goodbye to his brother,  promises to be back, and escapes through a window.
Next we see the younger brother Nate (Holland) grown up, a bartender, and a thief.  He hasn’t heard a word from his brother.  Now, we’re beginning to get the idea that this is a crime family, when Victor (Wahlberg) appears, catches Nate at his game, and enlists him in finding a treasure in one of Magellan’s ships sunken centuries ago.
Holland is good at playing the somewhat naive (like a fox) likeable young man who must have gained something from the nuns in his orphanage.  Wahlberg’s character is more mysterious, and we’re meant to wonder whether he is a good guy or a bad guy.
Most of the action, though is with Nate and two women, Braddock (Gabrielle) and Chloe (Ali), both inserted to add glamour and expert fighting skills.  As part of the contrivances of this formulaic production, one woman is a proper sounding British woman with dark hair; the other is a mysterious avant-garde dressed black woman.  They and Nate perform impossible feats that become distracting simply by their implausibility.
The settings and Chung-Hoon Chung’s cinematography are about the only aspects of Uncharted that I enjoyed.  His art puts the viewer in the scene in contrast with the dialog that pulls one back into reality with the plot holes and implausibilities.
They’ve set us up for a sequel to Uncharted, but I wonder who will want to see it.
Grade:  D By Donna R. Copeland
Posted by donnarcopeland at 7:15 AM