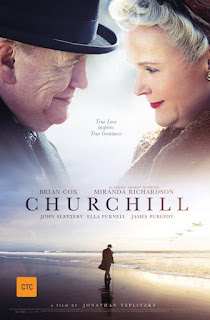 This critique is revised from an earlier version published on 6/1/17.  The revision is as a result of learning that the film does not adhere to important historical facts, according to others more knowledgeable about history than I, and most notably after a Radio Brave interview with Winston Churchill’s great grandson (https://www.facebook.com/RadioBrave/).  Jonathan Sandys has devoted his own professional life to the study of his grandfather’s life and legacy.  In his own words, his “mission is to continue the amazing legacy Sir Winston left the world, and work with present and future generations to inspire the great leadership of courage, faith and integrity employed by [Churchill] throughout his tumultuous life” (http://leadlikechurchill.org/profile/).  In the interview, although Jonathan Sandys praised the actors’ performances, he stated that the script is highly inaccurate, specifically with reference to Churchill’s participation in D-Day planning, his personality characteristics, and his relationship with his wife Clementine.  In my opinion, this detracts significantly from the film Churchill, so I have lowered my grade and revised some of the content of my original review.
In the film, it’s June of 1944, and France has just come under German occupation in WWII.  The Allied commanders are meeting in London to consider Operation Overlord, a D-Day plan to invade France on its northern border and drive the Nazis out of the country.  There has already been general consensus that it’s a viable plan, and General Eisenhower, Supreme Commander of the Allied Forces (Slattery), Field Marshall Montgomery, Field Marshall Smuts (Durden), and the other leaders are forging ahead with it.  Although the film depicts Prime Minister Churchill as disrupting the planning, this is not what actually happened; he was completely in favor of the plan.
Also in the film, for the first time, perhaps, we get a peek into the role his wife “Clemmie” played in supporting Winston, which is historically accurate.  She was stalwart and helpful in her advice, and the couple had a mutually beneficial, loving marriage. The film indicates that there was considerable conflict between them, which is inaccurate.
Churchill is beautifully filmed, coming across suspenseful and as much of a thriller as a biographical dramatization, even though we know how it’s going to turn out. Director Jonathan Teplitzky (“Indian Summers”, “Broadchurch”, and The Railway Man) and Cinematographer David Higgs present us with scenes that are visually luxuriant with symbolic references for more depth of meaning. Higgs captures symbolic moments with his camera, as when Churchill drops his hat while leaning over the muddy beach and it gets tossed into a turbulent sea growing progressively more red, trying to ride its waves (moments of agony for Churchill); or at the end when he gives a salute with it on his cane to the troops’ invasion of Normandy, and after his giving in to the pressures he has faced, it flies off, and scoots playfully down the seaside as if to say, “all is well.”
The talented and experienced composer and musician Lorne Balfe seamlessly pairs his music with moods of whatever scene is taking place, whether it’s of Churchill contemplative on the isolated beach, the zippiness of a car tooling down the country roads, personal conflicts, or more severe modernistic strains accompanying thoughts and talks of war.
Brian Cox has probably delivered the peak performance of his career in depicting such a complex and deeply respected figure in world history.  He convincingly captures Churchill, who has been credited as “the greatest Briton of all time” because of his depth and honesty of character.  He was a fearless leader who, at the same time, had the greatest respect for his king, King George VI.  Not an easy role to play.  Miranda Richardson as Clementine had a challenge of matching the fine performance of Lindsay Duncan in the 2016 TV production, “Churchill’s Secret.”  She does this capably and provides warmth and subtle wit to this presentation.


This is a British production with mixed quality about the Allied decision to invade Normandy and liberate France on D-Day, 1944.  Filming overall is of the highest quality in terms of direction, acting performances, cinematography and music.  It is unfortunate that Alex von Tunzelmann’s script strays so far from historical fact, whether it was her own decision or those of the producers’ overseeing the project.

Dramatization of the Allied commanders’ decision to invade Normandy on D-day, 1944.

Posted by donnarcopeland at 7:19 AM