WAR FOR THE PLANET OF THE APES 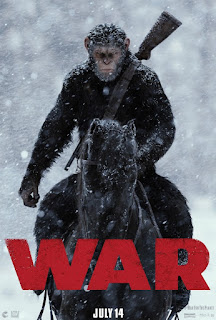 In the 2014 rendition of the Planet of the Apes series, Caesar as the beloved leader of the ape colony, tries to protect it from the encroachment of humans on their territory.  Because he and some reasonable humans are able to negotiate terms, the humans are allowed to work on a dam that will provide for desperately needed electrical power.  The truce is disrupted by distrustful parties on both sides—Dreyfus, one of the leaders of the military, and Kobo, the ape who retains resentment toward humans for the years he was held as a research subject.  Terrible betrayals and battles ensue, with the result that even though peace was attained, Caesar has been warned that the military is planning another attack on the ape community.
This rendition is a battle of wills between the Colonel (Harrelson) and Caesar (Serkis).  The army led by the Colonel has attacked the ape colony, leaving devastation in its wake.  Caesar tries repeatedly to negotiate and reason with the Colonel, but the Colonel has gone slightly off his rocker, with a God complex and the firm belief that if he doesn’t wipe out the apes, they will wipe out the human race.  Caesar even tries to communicate with him simply by staring at him (hoping to shame him), but to no avail.  The Colonel is impervious.
Caesar wants to go after the Colonel on his own, advising the colony to stay put, and leaving his young son Cornelius with Lake, but Maurice and a couple others insist they go with him.  Along the way, they come upon a girl and a dying solder who are mute and they have to figure that out, but Maurice is adamant about not leaving the girl behind by herself, so she becomes part of their small band.   This character seems extraneous to me, and I wonder about the purpose of its inclusion.
What they eventually discover is that most of the ape colony has been captured and enslaved by the Colonel, who has one of the traitorous apes around to manage the enslaved, Rex (Olsson), a Kobo follower.  They hope to get inside and rescue everyone, and once again, Caesar insists on going in alone while the others wait a distance behind.  Unfortunately, Caesar gets captured, and it looks like all hope is lost.  But with a little luck and the reconnaissance of Maurice et al., dramatic things are about to happen.
Director Matt Reeves and his writing partner Mark Bomback are a winning team in bringing fresh ideas to the franchise to keep it exciting and filled with tension.  They highlight the ethical dilemmas and flaws of leaders who may or may not understand the implications of their actions.  They underscore the importance of strategy in a conflict and the elements that go into eliciting the loyalty of one’s team.  They also seem to be keenly aware of the combination of luck and skill that go into military victories.
Technological wonders in the series continue with the action capture of Serkis’ Caesar and the visual effects by Weta Digital most striking.  The extended battle scenes do become tedious in places, and I suspect they are primarily to show off the technology.
Humor is lavishly inserted in this version by the character “Bad Ape” (Steve Zahn), who is a different species from the apes and one who escaped an American zoo, avoiding Simian flu.  Softness is provided by the lovely mute girl with the luminous eyes and expressive face played by Amiah Miller.  She shows much needed tenderness toward the apes and lends meaningful aid, although I do not think this important enough to have included the character..

Despite this being the third in the reboot series, the filmmakers keep the story of the apes interesting and fresh.