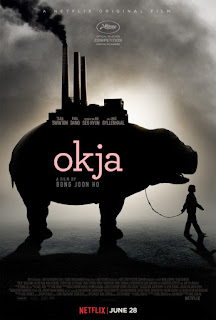 A live pig sold for a golden replica serves as the metaphor for this film about a young girl in South Korea and her soul mate, a huge pig she’s named Okja.  Mija (Hyun) is devoted to her pet and is unaware of the contractural agreement her grandfather signed 10 years earlier.  Thinking he is doing the right thing, the grandfather is ready to return Okja to the American company who gave it to him for 10 years, in exchange for the gold piece.   But he is mistaken in thinking Mija is going to value the gold more than the pig.  His bargain illustrates how capitalist schemes can appear so appealing to naïve peoples.  When Grandfather proudly gives Mija the golden relic and she realizes what he has done, she races after the truck carrying Okja away.  In this, the film likewise illustrates the betrayal of the younger generation by the older.
The background story is about a wealthy American family with a multi-national food tech corporation that is unmindful of its responsibility to humankind and is single-minded in its profit motive, as lived out by the Mirando twin sisters (Swinton).  Lucy, who has always seemed to be in a one-down position, has dreamed up a contest that she is sure will win over her sister and bring her respect and love from the general public.  This is done by giving poor people around the world a genetically altered pig to raise for 10 years, with the ultimate aim of having a contest as to which one could feed the most people in the world (example of genetic experimentation and conflict of interest perhaps?).  Mija’s grandfather was one of those given an animal.  In the meantime, Okja is Mija’s only companion, and has even saved her life once.
What follows is a rather fantastical madcap story involving international travel, daring car/truck races on the highways, the involvement of animal rights advocates (Dano, et al.), the pig competition, and, ultimately, the slaughterhouse; but Mija has her head about her and extraordinary smarts, and is out to bring Okja home.
Writer/director Bong Joon Ho (Snowpiercer, Mother) is a master at depicting dramas that pose ethical and socio-political situations for the audience to ponder, and here he makes it clear that we all have some responsibility for the state of affairs, either knowingly or by default.  That is, the grandfather is myopic as to his granddaughter’s wishes and ultimate welfare, the animal rights advocates are well intentioned but rather narrow-minded and inept, and the Mirando corporation has dual purposes topped off with petty rivalry among the owners.


Swinton is virtually unsurpassed in her ability to portray any character she’s presented with, and has a particular knack for odd, quirky personalities who have just enough plausibility to intrigue us.  Playing her character here and her chiding twin is entertaining in itself.  Young An Seo Hyun is captivating as a purposeful, devoted adherent to her principles.  Dano is gifted in his portrayal of appealing, sincere proponents of a cause, and he comes through here.  I was disappointed to see one of my idols, Jake Gyllenhaal, play such a buffoon role that seemed to have no purpose in this drama.  He executed it well, but I can’t see the reason for having such a character, who is shown as a self-inflated blowhard.

The purpose of this well executed film seems to be in having us contemplate where our food comes from, something we usually don’t want to do.