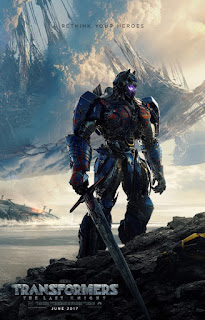 We start out with a bit of history of King Arthur and his Knights of the Round Table—with the addition of “knightly” autobots who stand behind each knight and who will help the English save their country from the Dark Age invaders.  They’re at a standoff with the invaders and are calling for Merlin the Magician, for aid.  He is on his way to engage a dragon—ancestor of the autobots—to align with the English to renew their partnership and save England.
Fast forward to modern times.  The hero-bot Optimus Prime is missing, and autobots—which have been outlawed on earth—keep falling mysteriously from the sky.  Some land in a Bot junkyard overseen by Cade Yeager (Wahlberg), who regards the autobots as friends.  He is trying to repair their injuries by restoring lost parts.  Unbeknownst to him, a young girl Izabella (Moner) has lost her family and is now living in the junkyard, having made friends with the bots, especially Squeeks, trying to restore them just like Cade is.  But when he discovers she’s there, he tries to get rid of her, saying she is just a kid.  Little does he know, she is his persistent heir apparent, and will turn up intermittently throughout the film.  Needless to say, in this testosterone-filled fantasy, it takes him a long time to realize her value.
Earth is in a state of panic now as it has realized that the autobots are attacking earth, and doesn’t really know why.  We the audience do; it has something to do with intrigue among the Bots.  Optimus Prime is devastated to find his beloved planet Cerberon—his home—has been destroyed.  Quintessa (Chan) the sorceress tells him that to save his planet he must go to earth, where a valuable artifact is buried.  If he brings it back to her, Cerberon will be restored.  He is bewitched, so although his reclaiming the artifact will destroy the earth, his ally, he proceeds to recapture it.
Back on earth, Cade gets a message that he is to meet with Sir Edmund Burton (Hopkins) in London, and is transported to his estate by his trusted Bot Cogman (Carter).  The earl Burton explains his historical connection to a family descended from Merlin, one of whose ancestors has passed down the power of the artifact sought by the Autobots.  She is Vivian Wembley (Haddock).  She and Cade, who has a significant medal picked up from the junkyard wrapped around his arm signifying that he is the last knight, must recover the artifact, thereby saving earth.
Just as in all action movies these days, multiple intrigues and battles ensue between the autobots and earth, the central struggle being the recovery of the artifact to the rightful heir.
Michael Bay has directed all five of the Transformers renditions, and his experience is evident in this production, in that the film perpetuates the theme of humans vs. robots, has impressive special effects, and recruits fine actors to play the roles.  Where it lapses is its repetition of well-worn themes and too many battles in which the protagonists are not well defined.  This rendition could have been reduced from its 148 minutes by eliminating extraneous elements, such as the Izabella character trailing after Cade and the spoof of a bad scientist.  Why discount science in this day and age??!!  Humor bits could also have been eliminated:  Vivian’s mother and aunts trying to marry her off and wise cracks made by many characters are tired jokes that fall flat.
Parents, please don’t bring your children to this movie unless they’ve shown a particular interest in robots and have loved previous Transformer movies.  A measure of interest for children is the 20+ exits/entrances during the movie by people from my row, mostly by children.

This is a continuation of the theme of humans vs. robots in the Transformers series.

Posted by donnarcopeland at 12:45 PM