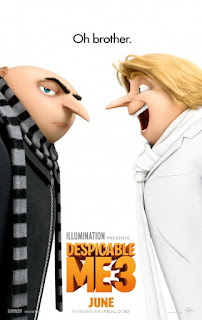 The special effects, humor, and sheer imagination of the Despicable Me series continue to be refreshing and delightful for children.  There were many chuckles from children (and adults, by the way) in the screening I attended, as well as sighs during the tender moments.  Like its predecessors, 3 is mostly entertaining (as it’s meant to be) with colorful animation and special effects, some adventure, and fanciful transports (e.g., a golden car/boat/plane, and a Minion-devised airbus outfitted mostly with bathroom fixtures).
This rendition follows Gru (Carell), his wife Lucy (Wiig), and their three daughters, Margo (Cosgrove), Edith (Gaier), and Agnes (Sharrel), as they go to visit the heretofore unknown twin of Gru, Dru (Carell).  It turns out that the twins’ parents got a divorce when they were just babes, with the mother (Andrews) keeping Gru and the father taking Dru to another city.  After the father dies, the now grown up Dru invites Gru to visit him in Freedonia, where he has a prosperous pig and cheese farm, Gru is beside himself with expectations.  This constitutes one of the main themes of the story—anticipating something that may be different from what you expect, requiring some kind of adaptation on your part.  This happens not only to Gru in getting to know his twin, but also to Agnes (Scharrel) when she goes into the forest in search of a unicorn.
The new character in 3 is Balthazar Bratt, a former child star who, in retaliation for Hollywood’s rejection of him has become a bad boy.  He revels in boasting nowadays, “I’ve been a bad boy!” as he is out for his revenge on Hollywood for cancelling his show, as well as for Gru and Lucy, AVL (Anti-Villain League) agents who have come close to capturing him for stealing the largest diamond in the world.  His escape from them results in their dismissal from the League, leaving Gru in an existential crisis.
It’s at just this time that Dru invites the Gru family to visit him.  What Gru encounters is a brother who felt he could never please their father.  It turns out that the father’s nickname was “The Bold Terror”, a kind of villain that Gru used to be.  But now Gru has a wife and family, he has been trying to disengage from that side of his past.  (It should be said here for those who know the previous Despicables, the Minions are none too happy about this.  However, in this rendition they manage to get incarcerated, escape, and, with their ingenuity, be in a position to aid their hero Gru.)
Dru’s wanting Gru to teach him villainous skills puts Gru in a bind.  But he’s now in such a funk from being fired that he succumbs to Dru’s pleas.  He’s still crafty, though, and the way he hopes to satisfy both Dru’s desires and his own need for recognition by the AVL is to get back the diamond from Balthazar.
The well-illustrated theme of Gru adapting to changing circumstances is reinforced with his newly acquired conscientiousness in doing what is right and feeling compassion for others less strong.  He is developing a more flexible way of thinking (i.e., seeing that Agnes’ discovery of a goat is just as exciting for her as finding a unicorn) and seems more grounded in living a life of honor.
I found this update to be entertaining in its story, animation, and special effects, and the music (Heitor Pereira and Pharrell Williams) enjoyable.  It doesn’t have really strong messages for children, but sometimes, pure entertainment is all that’s wanted.  It’s not much different from its predecessors, but that is not likely to bother those who love these films.

Despicable Me 3 should do well at the box office; it was applauded by the audience at last evening’s screening.

Posted by donnarcopeland at 12:12 PM