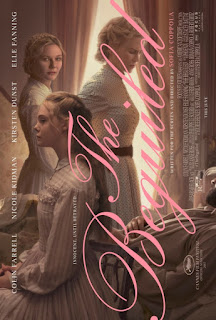 Beguile:  To deceive with charm.  By the end of the film, which ends up being something of a thriller, exactly to whom the title refers is ambiguous.  The wounded Union soldier found in the woods by a young girl, Amy (Laurence) on a southern plantation during the Civil War is charming, polite, and gracious to his rescuers/hosts.  Tenderhearted Amy has helped him limp to the girls boarding school where she lives, counting on the head mistress, Martha Farnsworth (Kidman) knowing what to do with him.  Miss Martha is a Christian who is committed to its principles, so thinks it moral and proper to treat him before sending him on his way or notifying Confederate soldiers.  Her ambivalence is increased when she talks to some passing soldiers with prisoners and find they are taking them to prison to die.
Col. John McBurney’s (Farrell) charm has an oily feel to it from the start, prompting the viewer to wonder what he wants to get out of it; he is clearly not without guile.  He is lavish with his compliments anytime one of the residents does something for him, and he flirts shamelessly but knowledgeably—that is, he has a sense of what approach will be pleasing to each individual.  And he has a dark side, which will be revealed as the stress level rises.
Quite the opposite, Miss Martha is crisp and direct with John, purposefully stifling any hope he might have of piercing her armor and being of help to him.  She makes it clear that she is only doing her duty and will send him on his way as soon as he is physically able.  Nevertheless, he persists, knowing from past experience that he is able to wheedle his way past feminine defenses.
But John has likely never been in a situation where he is surrounded by six females, all being drawn to him simply because he’s a male because it’s been so long since any of them have been around men.  They’re staying holed up in the school because for various reasons there is no other place for them to go.  Everyone else has gone home for Christmas.  He seems almost giddy about being the object of their competition with one another, particularly the three adult women, Martha, Edwina (Dunst), and Alicia (Fanning).  He has a special bond with Amy in their mutual fascination with plants and animals.  When he is better, he will work in the garden.  Jane (Rice) plays piano, which draws her to him, and Marie (Riecke) simply lets him know she cares about him.
There are tense moments when soldiers come by the house (with John hidden), and as jealousies arise and John’s leg begins to heal, allowing him to be more mobile, the situation comes to a resounding crisis.  Feeling desperate and emasculated, John’s dark side surfaces, and the women must defend themselves.  This is where their guile sheds more light on the title, The Beguiled.
The film is well conceived (based on a novel by Thomas Cullinan) and directed by Sofia Coppola, who well deserves the director’s prize she received for her work at this year’s film festival in Cannes.  Although I’m not always a fan of her work, this production moves along at a good pace, and facts about the characters are revealed gradually, heightening suspense.  In addition, the astute psychological observations about women, women and men, and how they behave in specific situations rings so true.
Nicole Kidman won a special price at Cannes for being in four different films screened there, one of them being The Beguiled.  As Martha Farnsworth, an upper-class southerner, she carries the role with precision, with just the right degree of softness, authority, compassion, and intelligence.  Although keeping her emotions in check, she clearly shows affection for her charges, and listens to them respectfully like a wise leader.  Kirsten Dunst and Elle Fanning lend fine support in their veneers of compliance masking rebellious leanings.  I was really taken with Oona Laurence’s character Amy and her performance.  One of the delights of the film were the scenes when the females were together making decisions in a spirit of unity.
Philippe Le Sourd’s cinematography contributed greatly to the mood and look of The Beguiled, with varying brightness, darkness, and chiaroscuro effects.  Once, an exquisite close-up of a spider web clarified the visual and symbolic meaning of the scene and the film as a whole.

An intriguing picture of women sparring with/over a man.

Posted by donnarcopeland at 11:56 AM