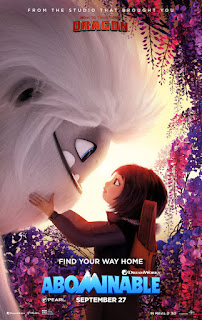 This is a kid-friendly adventure with a delightful mixture of pure fantasy, thrills, magnificent scenery, and good-natured playfulness, while reminding viewers of the importance of home, family, memories, and paying attention to grief and hardship—all substantive values we want our children to learn.
“Abominable” is a reference to a mythical creature supposedly living in the mountains of Asia.  His other name is “Snowman”, which the filmmakers have exploited for visual purposes by presenting him as a big furry snowball to detract from his yeti reputation of being a dangerous character.
In this story, a yeti appears out of nowhere into a teen girl’s life quite by accident. We’re not told immediately how he got to where he is, but he’s in a big city when he spots a travel billboard with a picture of Everest on it and runs toward it, thinking it is his home.  But he’s actually in Yi’s rooftop secret playhouse.  As they get acquainted with each other and begin to be able to communicate, the threat of a helicopter with a bright light looms overhead, and Yi realizes it is searching for “Everest”, as she has named him.  The yeti has enormous eyes and is somewhat clumsy, but he has a quick mind and an eye for danger. When he keeps gazing longingly at the Everest billboard, Yi (Bennet) knows he is wishing to go home, and she intends to get him there.  And as one character says in the course of the story, “When Yi sets her mind on something, nothing is impossible.”
Getting Everest home will be a journey with obstacles no one on the trip could predict.  Two other kids manage to come along; Jin (Trainor), Yi’s responsible cousin, and his little brother Peng (Tsai).  But the major concerns for them are Mr. Burnish (Izzard), a collector of exotic animals, and his colleague, Dr. Zara (Paulson), a zoologist, who are in hot pursuit.  The intentions of these two are questionable right from the start.  They will be tailing the small party, trying desperately to trap them for various purposes, but primarily in the interest of their reputations—(just one of the many enlightening models offered by the filmmakers for children’s benefit).
Yi is depicted as grieving for a now absent father and trying to compensate for the loss by earning extra money, honoring his dream of taking her to exotic places in the world, and being the best violin player she can be with his violin left to her.  Jin is portrayed at first as a fashion-absorbed teenager who seems to be preoccupied with popularity and appearance, but later, is shown to have protective feelings toward his cousin (unbeknownst to her; she will only discern this much later) and his little brother.  Peng is a typical child who recognizes the yeti as a peer, letting Yi realize that Everest is only a child who misses his mommy and daddy.
The Abominable story is engaging for all ages of children, providing excitement, mystery, and enchanting fantasies—a delightful “action film” for them, with models for learning rather than violence for thrills so common in action films for adults.  As with today’s action figures, Everest has special abilities he introduces with a humming sound that transport the kids out of danger more than once.  Blueberries are used in one trick, which produces tittering delight from the audience.
Writer Jill Culton and her co-director Todd Wilderman are to be congratulated for such an exciting, very contemporary, story that contains many gems of truth. Main characters voiced by the children (Bennet, Trainor, and Tsai) and adults (Izzard and Paulson) are snappy and fun, with well- drawn and animated forms.  Really fine production design (Max Boas), music (Rupert Gregson), and cinematography (Edward Crawford) fit right in with this quality mix to help make it a hit.

An action film for kids with heart, spirit, and delightful humor.

Posted by donnarcopeland at 2:56 PM