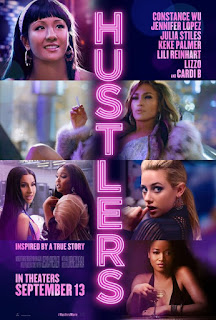 Hustling pays off—sort of—according to this movie about a group of strippers in New York eventually conning the likes of Wall Street bankers.  It’s a dramatic account based on a true story as reported by one of the screenwriters (with director Lorene Scafaria), Jessica Pressler ( "The Hustlers at Scores: The Ex-Strippers Who Stole From (Mostly) Rich Men and Gave to, Well, Themselves". The Cut. 2015-12-28).  It’s said that truth is stranger than fiction, and this is one of those cases where the saying applies.  I’m sure some of the conned men might say, “You can’t make this thing up.”
At any rate, Scafaria and her crew have put together an entertaining comedy that has rings of truth all over it, making it more substantive than simply humorous.  Comedy flows in one-liners such as a graphic artist commenting on an education-aspiring stripper’s handwriting:  “You’re handwriting is so beautiful!  You could be a font.”  The substance is about truths found in human beings’ continual wishing for more (often the source of their vulnerabilities) and the sisterhood found in so many female groups, an aspect mostly ignored in fictional portrayals.
Jennifer Lopez as Ramona and Constance Wu as Destiny form a consummate pair of conniving women driven by life circumstances to cut certain corners simply to survive.  Their on-screen attraction (toward each other and ours to them) drives Hustlers’ momentum, which I attribute to their acting skills and charisma.  As in many close friendships, the characters Ramona and Destiny differ significantly from each other, while their skills and values are complementary; Ramona is the “people person” able to talk down any complaier and Destiny is the organized, business-minded one with basic human values.  (She has her limits as to how far she will go in getting clients to submit and a practical, “business” sense.)
The film gives us a picture of strip clubs at the time—the tremendous amount of money flowing in, the exploitation of the strippers by the club owners, the “art” of attractions like pole dancing, and the special kinds of relationships the strippers had with their clients.
Then comes the recession of 2008, which results in the abandonment of the clubs by wealthy men, the introduction of cheaper Russian girls willing to perform whatever is requested, and Ramona and Destiny realizing they need to adopt a better business model.  They are astute in figuring out how to benefit the clubs—their source of support—along with themselves.  They will “go fishing” for men in smaller venues like bars to bring to the clubs.  This is imminently successful until…
Towards the end, the story gets a bit absurd, but mostly it shows a very clever ruse.

Thanks to director Scafaria and the stars, Hustlers ends up being an entertaining romp with substance to boot.