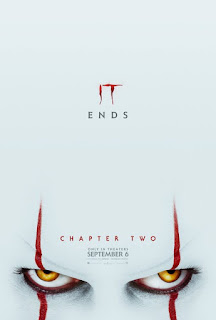 This reunion of childhood friends after 27 years isn’t going to be typical; for one thing, a fat kid is now trim and fit—rather than everyone being more portly—the usual reunion preoccupation.  But of course it will be out of the ordinary in so many other, more important, ways.  It’s important to know that this group of reunion members are from the “Losers Club”, and “losers they will always be”, BUT they have pledged as a group to defend against a dark force.
These friends are called together based on a promise (sealed in blood) made at a time when they thought they had done away with Pennywise (Skarsgard) the wicked clown who preys on young children.  Now Mike (Mustafa) is sending them all urgent messages to come to Derry, Maine, at once.  This will be no easy feat, because they’ve all (except for Mike) left Derry to establish careers and, sometimes, families.  We see each of them attempt to disengage from their commitments to honor the childhood pledge.
Only one (Stanley, played by Bean) chooses not to go, but the rest brave all kinds of obstacles to return to Mike in Derry, Maine.  He has brought them all together, of course, to tell them that Pennywise has resurfaced and is killing children.  He has done enough research to learn that an ancient Native Indian tribal ritual is called for.  Each of them must find his/her own distinctive “artifact” (from childhood) and bring it to resolution in a ritual.  It’s a bit Jungian in that each must discover his/her shadow and resolve the conflict, one of the stronger assets of the film.
Beverly (Chastain) has issues with her father, Richie (Hader) has unresolved sexual identity issues, Bill (McAvoy) is carrying the weight of his brother Georgie’s death on his conscience, Ben (Ryan) is still suffering from his “fatness” and the rejection of his childhood flame, Eddie (Ransone) has Mommie issues, and Mike has to come to terms with prejudice against his race.
Much of the movie covers each person’s struggle with the psychological issue significant for him/her, emphasizing the “losers” aspect (“and we will always be losers”) and the group sticking together to accomplish a noble goal.  I enjoyed these parts of the movie, directed by Andy Muschietti and written by Gary Dauberman based on a Stephen King novel.
Unfortunately, the film degenerates into a showcase for special effects, making it insufferable in its length (almost three hours), and completely unbelievable in plot.      Additional nonessential sequences were in the beginning about brutality against gays and toward the end in gay references, neither of which fit in with the main story. The filmmakers seem to be making a side point—which I sympathize with—but find the sequences “stuck into” the plot.
It Chapter Two has A-list actors in the major roles, and they are superb in what they are given by the script, but their roles are limited.  Jessica Chastain has little to do other than react to the male actors. With her talent, she is wasted in this film.  James McAvoy’s character is a little more filled out, but fails to make him the forceful presence he should be.  Probably the standout is Bill Hader as Richie whose ambivalence and neurotic characteristics gives him more of a platform to exploit his range and ability.
Most of all, Director Muschietti can be faulted for getting so caught up in special effects, he lost sight of the “meat” of Stephen King’s works having to do with friends sticking together, the drama in the growing-up years, and the influence of early traumas on adult life.  He addressed these, but then covered them up with showy special effects and extended final scenes with Pennywise to an almost unbearable length.

Pennywise and pound-foolish seems to fit this rendition of a Stephen King novel.