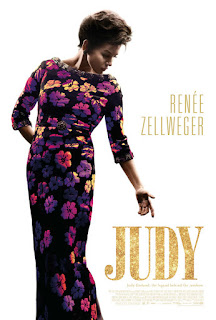 Judy Garland’s reputation for the heights of talent and performance and the depths of despair and catastrophe are all keenly represented in this docudrama, with Renee Zellweger ably capturing the starring role.  The film is strengthened by giving snapshots of the young Judy’s life being dictated by the MGM movie studio, pre-child labor laws (e.g., 18-hour days, no lunch breaks, strict diet, caps on her teeth and discs to reshape her nose), and Louis B. Mayer’s depiction of her as being unattractive, all of which affected her self-image for life.
But she was clearly talented and had become a star by the time she was 18, earning the Academy Juvenile Award.  During the height of her career, she won Academy and Golden Globe awards for acting and Grammy awards for singing.  Behind the scenes, however, her personal and professional life seemed to pivot from one catastrophe to another, some of the studio’s and, later her own making, as the direct result of drugs and alcohol. But on top of that there was an accumulation of stresses and strains extending from childhood to the end of her life.
The movie Judy mostly focuses on the later years of when Garland was separated from her children and living in London.  It shows her being out of control much of the time with a patient “handler” (Rosalyn Wilder, played by Buckley) using every strategy she can think of to get Judy on stage.  Grieving from the separation from her children, who are with ex-husband Sidney Luft in the U.S. (custody rulings forbid their being taken out of the country), Judy throws herself into another marriage—to Mickey Deans (Wittrock).  However, that relationship is short-lived because of her disappointment in his not coming through with a promised business deal that would relieve her of concert touring and allow her to return to the U.S.
Zellweger’s performance is noteworthy, and may signal a rousing comeback after her Oscar win in Cold Mountain (2003), which was followed by a series of insignificant roles in minor films. Here, she captures the star’s high emotionality, charm, and voice in the later years of the star’s life. Jessie Buckley as the assistant who often gets Garland on stage is the exemplar of a dogged pusher who uses a world of patience and clever strategies to manager her charge—and still show that she actually cares.  Likewise, Finn Wittrock portrays a young husband desperately trying to be a support for Judy, but ending up mystified in dealing with her dependency and rapidly fluctuating moods.  Rufus Sewell is effective as the fifth of Judy’s husbands, Sid Luft, as is Michael Gambon as the British theatrical impresario responsible for her London appearances.
I imagine that the experience of seeing this film resembles what it must have been like for the people surrounding Judy Garland during her adult life, particularly the later years, when it is obvious how trying, even exasperating, she could be, while still showing beguiling charm.  Its strength is in Zellweger capturing so well the full range of Judy Garland’s personality and emotionality, and, above all, a voice that entertained millions all during her 45-year career.

A moving chronicle of the later years in the life of a beloved but damaged star, Judy Garland.

Posted by donnarcopeland at 12:52 PM