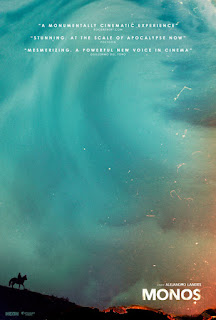 Filmed in the lush countryside of Colombia by the artistic Jasper Wolf, Monos’ story perplexes and shocks against the backdrop of green mountains, dense jungles, and rushing waters or clear lakes and streams.  Some of the water scenes are breathtaking in capturing its myriad beauty while filming the chases and conflicts among the characters beneath the surface.  These scenes are in direct contrast to the typical roaring chases in most action films; the silent struggles taking place here are much more suspenseful and jarring.
Director Alejandro Landes co-wrote the script with Alexis Dos Santos from a story he conceived.  It’s a disturbing account of a group of rebels in an unnamed South American country who are attacked repeatedly by the militia, necessitating frequent maneuvers to hide their location.  But as in any group, conflicts arise, sometimes based on competition either in love or war—or even by accident--but these are perhaps more striking and moving because this is a group teenagers.  An overseer comes by now and then to shape them up and strengthen their resolve, and they have frequent contact with leaders via radio communication.
The first leader of the small group designated by the overseer is Wolf (Giraldo), who has also gotten permission to “partner” with Lady (Quintero), e.g., sleep together.  [Landes has named his characters with some humor; i.e. Wolf, Lady, Rambo, Bigfoot, Smurf, Dog, and Boom Boom.]   Perhaps this is intended to help us keep track of who is who, but I think most viewers will have to make some effort to remember all of them and their personalities and roles.
At any rate, an eventful moment—perhaps an accident—results in tragedy, and consequently Bigfoot (Arias) is then put in charge.
In addition to fighting the militia, the group is charged with keeping a prisoner, a woman called La Doctora (Nicholson), an engineer who has been kidnapped by the rebels, but is persistent and courageous in trying to escape in the mountains, in the jungle, and in the rivers.
Sprinkled into a story with high tension, there are moments of humor, admirable skill and courage shown, as well as honesty.  During radio communication, members of the group are asked to comment, sometimes with surprising candor, but mostly glossing over truths.
Altogether, Monos is a photographic wonder, with a sometimes haunting, sometimes melodic, score by Mica Levi.  The plot by Landes and Dos Santos is intriguing and astute about humankind, but occasionally takes a fill-in-the-blanks approach, leaving the viewer to sort out the players and speculate about the plot.  This is especially true at the end, when significant threads are left hanging.
Despite this, I applaud the movie’s creativity, beauty, and truth, and its presentation of colorful characters that are highly entertaining.

A picture about a group of colorful young rebels doing what they are known to do against the backdrop of war and abounding nature.