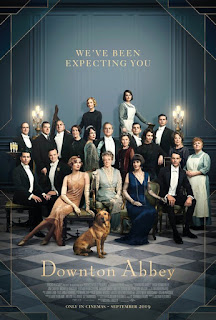 For those who followed the television series, how the movie of Downton Abbey would be the same as or different from the series is a burning question.  Having been a devotee of the series, I can say that Julian Fellowes (writer of both) and director Michael Engler were highly successful in bringing in new mysteries and intrigues while maintaining the family drama as we have come to know it and have become attached to the characters. Fellowes is a genius in creating figures we can all recognize, whether they are among the aristocrats or the common people, and make them live and breathe as if they’re a part of our own family, and make us love them.  He is also witty and skillful in giving life to age-old arguments, such as between systems of monarchy and social hierarchies versus more progressive/liberal/democratic forms of government—topics still on the contemporary mind.
Having the King and Queen of England (played by Jones and James) come to pay a visit at Downton Abbey provides the perfect opportunity to explore these issues. As would be expected, the royal entourage consists of people much more condescending toward the locals than the royals themselves.  That means that the staff members at the Abbey will be shunted aside by the snooty royal butler (although he has a fancier title), chef, valets, dressers, and other attendants.  But never underestimate the power and finesse of the more democratic system in Downton Abbey, where the Crawleys seem to be moving decidedly in the direction of more progressive societies.  How the Downton staff manages this insurgency is part of the intrigue and mystery in the production.
Subtly, Fellowes presents alternative ways of rebelling against a social order, one violent, others more clever and foregoing any violence.  This is one aspect of the film that will keep veteran watchers of the series glued to the action.
Fellowes and Engler astutely placed the dowager Countess Grantham (in the inimitable form of Maggie Smith) at the center of the conflict, pitting her against a member of the royal staff, Lady Bagshaw (Staunton), cousin of Lord Grantham (Bonneville), with whom she has had an ongoing struggle for decades. Maggie Smith has remained the most visible character in the series for her sharp, acerbic, and always humorous witticisms, so it is both fitting and smart to put her center stage and frame her specific conflicts within the larger issues about social order.
Other key roles in this drama include Lady Mary (Dockery) and her quandary about whether and how long to maintain the traditional house; her lady in waiting, Anna (Froggatt), who uncovers a crime and uses it to advantage, along with helping mastermind the resistance against the royal staff; and Tom Branson (Leech), an Irish commoner and relatively new member of the family clearly establishing his loyalty to them, along with the reasons why.  Each of the other beloved characters gets a slice of the story, which works to keep it moving (and, I suppose, satisfy veteran watchers as well as newcomers).
To me, this production is unbelievable in its mastery in incorporating so many important elements of the series into the movie and still presenting a serious argument about social class and government from many different points of view. All this is accomplished while preserving a real sense of humanness and delightfulness in the characters. I still thrill to the sound of musician John Lunn’s theme song as soon as I hear it.  He has been with the production throughout its existence, beginning in 2010, and has made a substantive contribution to its success.

If you’re a Downton fan, run—don’t walk—to the movie.