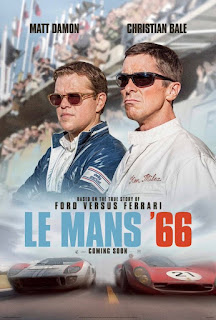 Yes, this film is about car racing, but it’s also about corporate culture and how it wields its power, showing how one major player can influence major events; and it’s about the friendship between two men, both of whom fit the emotional reticence of “macho” men, yet remain extremely close to one another. Thankfully, the wife and son of one of them provide balance to a testosterone-filled drama.
Carroll Shelby (Damon) has a significant reputation as a racecar driver, but when his health forces him to stop, he becomes a designer of racecars, pulling in his good friend and driver, Ken Miles (Bale).  Shelby has a successful business designing and assembling sports cars, partly by virtue of his salesmanship and negotiating talent. Ken, on the other hand, is prickly, often offending others, and his car repair business is failing.
When Lee Iacocca (Bernthal) of the Ford Motor Company begins to have aspirations of competing with Ferrari, current winner of multiple Le Mans races, he approaches Shelby, who has been the only American to have ever won the race.  He wants Shelby to partner with Ford to make a car that will give Ferrari competition.
What follows is the conflict between the creativity of Shelby and Miles with the Ford Corporation’s executive layers and its insistence on employees toeing whatever line it sets.  In addition, we see the struggle between middle-class “good ‘ole boy” war heroes and the upper crust of society.  We also get a glimpse of treachery that is sometimes characteristic of overly ambitious sorts and the self-entitlement of those born into wealth.
The film tells an exciting, gripping story (more-so for those who are fascinated by cars and racing), written by Jez and John-Henry Butterworth and Jason Keller, based on Anthony Pritchard’s book (2011) about the Le Mans 1966 competition, pitting Ford versus Ferrari.  It’s well directed by James Mangold, but the jerky editing—especially in the beginning—detracts from its success.  The roar of sports cars around town accompanied by a soft “Chica Chica Boom Boom” rendition is fun, but when the races are full on, on the track, it is hard on the ears and head for those of us less enamored by the sport.
Along with the excitement provided by a story about racing and personal conflicts, Christian Bale and Matt Damon are the hallmarks of the film.  They are the big draw, and lend their well-deserved stardom to boost the appeal.  Bale shows his range in all the different roles he has played (as a fighter in The Fighter, to an action figure in The Dark Knight films, to the Vice President of the United States in Vice, to name a few), and here as a cantankerous but brilliant race driver who keeps a cool head and is willing to take risks.  Damon’s Texas accent and persona come across as authentic, and it looks like he thoroughly enjoys savoring it the whole time. This role resembles his award-winning performance in The Martian, in its ingenuity and being able to think on his feet.
Lovely Caitriona Balfe as the wife of irascible Ken Miles, adds dimension to the story, and her pluckiness and daring is also one of the high points of the film. Most endearing, of course, is Noah Jupe as Peter Miles, Ken’s son.  Jupe mixes childhood reverence and joy showing keen perception on what Peter is learning, which, like the Molly Miles character, provides some levity to the male competitiveness.

Ford v Ferrari will be appealing primarily to car racing enthusiasts who will be fascinated by what went into the 1966 Le Mans race.