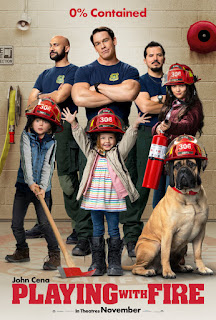 I shake my head when I see productions like Playing with Fire presented to kids.  Clearly, the filmmakers don’t know kids very well (all the dialog for these kids sounds like an adult who still has childhood remnants in his psyche and/or has no idea what real children are like), and they portray adults behaving and sounding like children.  The movie misses the mark in so many ways in consideration of quality programming for children.  These children smart off to adults (you’re supposed to laugh when they do), and the adults have their feelings stuck out, making them vulnerable and looking foolish, and do unlawful things like revving up the fire engines and roaring down the street on a shopping trip.
The star, Jake Carson (Cena), is aspiring to follow in the steps of his revered father, a smoke jumper, who followed the creed of being a first responder in wildland fires; these are highly trained firefighters parachuting into remote and rugged areas to contain the fire and rescue people.  His crew includes Mark (Key), Rodrigo (Leguizamo), and Axe (Mane).  They get fired up when they’re alerted to a fire that has reached some cabins in a forest.
As a well-trained crew, they quickly investigate, only to find three children huddled together; the oldest, Brynn (Hildebrand), holding her little brother and sister.  Keep in mind that none of the crew has any experience at all in dealing with children, and they’re terrified.  Roads are closed off, so they have to transport them back to their station.  But the heroic men treat them in all the ways that are bad for children—not listening to them and not respecting them, but still expecting them to do everything they’re told.
Once they arrive, filmmakers have them getting into all kinds of trouble with nail guns, fire extinguishers, paint strippers, and soap that becomes suds when it’s sprayed with a water hose.  All of this is supposed to be a barrel of laughs, but it’s completely off base in terms of reality, as these are clearly well brought up children, and Brynn has served as a sensible, mature mother figure for them.  All the antics are simply a way for the filmmakers to poke fun at the men.
A romantic interest (don’t we always need one?) is introduced in the form of Dr. Amy Hicks (Greer), an environmentalist whom Jake dismisses, but is, of course, secretly (he thinks) attracted to.  Authority is presented in the form of Commander Richards (Haysbert), who has informed Jake he will conduct an inspection at a specific time.  So when the whole place is in a shambles, everyone must work together to get it in tiptop shape.
The story ends with the creators’ still clueless as to what is good for children (a truckload of presents, for instance), and a shameless attempt to pull at the heartstrings, revealing significant parental loss.

If you know children and are mindful of them, you will not like this movie.