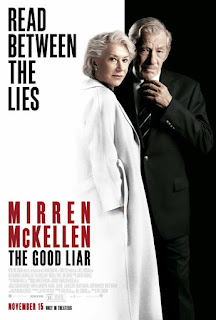 There are lies and damn lies (we’ll leave out “and statistics”, which is part of the popularized quote about three kinds of lies), which this clever film has aplenty.  Best not to sort them out in a review, because lying is one of the most entertaining aspects of The Good Liar.  It’s based on the same entitled thriller novel by Nicholas Searle, with screenplay by Jeffrey Hatcher, and it’s very cleverly written.  Director Bill Condon has exploited its strong points by leading the audience where he wants us to go with good pacing and information doled out in strategic bits.
Of course, the two main actors (Mirren and McKellen) are a major part of the show, bringing all their impressive experience to bear in portraying characters who are themselves acting, although not apparently so.  They meet on an online dating site with assumed names, but soon reveal themselves to be Betty and Roy, who have lost spouses fairly recently.
She is taken by his charms, much to the chagrin of her grandson Steven (Tovay), whom she regards as overly protective.  She makes it clear that even though she is a simple widow, she is in charge of her life. So when Roy makes her feel so special, she is ready to make life plans with him, disregarding her grandson’s warnings.
How will this turn out?  It’s clear that she is a wealthy woman who appears a bit naïve, and he has some kind of past that keeps bubbling up, but they seem to have worked out an arrangement.
But this is only part of the story.  The last 45 minutes of the film delves into material you probably wouldn’t have surmised.  The denouement brings in a history not imagined, although the viewer might be suspecting certain outcomes.
At any rate, The Good Liar is a deliciously conceived thriller that entertains throughout.  Music by Carter Burwell heightens the mood of the time and the action on the screen, transporting us into a thriller we can invest in.

An entertaining, intriguing story lit up by charismatic actors in a delightful ruse.

Posted by donnarcopeland at 8:35 AM