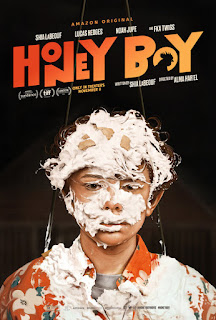 The poster of a boy after getting pie thrown in his face is eloquent in captivating the story behind Honey Boy.  In reality, the picture was made during a filming sequence when the child actor, Shia LeBeouf, was hit in the face with a pie. Metaphorically, it could denote LeBeouf’s childhood when he was living with his father and all kinds of things landed on his head.  At the time, he is a successful child actor who actually pays his father to be his chaperone [his parents are divorced, and with a criminal record, James Lort (LeBeouf) has difficulty finding a job].
Honey Boy is a largely autobiographical account written by LeBeouf about his childhood.  He plays the role of his father, whereas Noah Jupe plays “Otis” when he is 12, with Lucas Hedges taking on the role as an adolescent. All three actors give praiseworthy performances.
It’s a heartfelt rendition, showing the pain of discovery in the young Shia and his agony around the consequences later on.  James Lort is an unorthodox parent, to say the least.  It’s clear he has no inkling about how to be a father or how to guide his son either through role modeling or sage advice. It’s clear he has his own issues that spill over onto his son.  Although he’s desperate and is forced in some ways to have his son support him financially, it is humiliating for him.
As happens in such cases, the child takes on a parental role in comforting his father, reasoning with him, soothing his fears and unrest, and trying to coach him on how to be a better parent.  But, of course, this falls on deaf ears and escalates Lort’s discomfort and shame.  It’s so sad to see a child being so direct and clear about his needs and know that the parent cannot possibly understand because he himself has not experienced good parenting.
Honey Boy represents an honest effort to relate what transpired in Shia LeBeouf’s early life that led to his desperation as a young adult to come to terms with it and work through the consequences. It’s interesting to see elements in the father’s personality that have been transmitted to the son, such that his way of coping resembles his father’s—but only partially.  He gets help (that was likely inaccessible to his father), which appears to get him on track for recovery.  As good as the film is, directed by Alma Har’el, I wish she and LeBeouf had given us more information about the mother.  We only overhear her in phone calls.
LeBeouf’s performance as his father has almost an eerie quality to it in its perceptiveness and emotional understanding.  There is nothing like real experience to inform an actor about a role, and nothing like a talented actor capturing a real experience.  Lucas Hedges consistently gets praise for his varied roles, and here he conveys so well the “waking up” of a person beginning to probe his early life and relationships and being horrified at the enormity of the task.  Noah Jupe shows great promise and will surely always be remembered for his graphic portrayal of a young boy trying desperately to understand a parent continually giving him mixed messages.  He manages to show in his face all the turmoil that is going on inside him, and the agony that follows when there seems to be no way out.

Delving into one’s extraordinary past as a child movie star living with an abusive father takes courage and Shia LeBeouf shows he has that courage and willingness to share it with others as catharsis and possibly as a model for others from similar circumstances.

Posted by donnarcopeland at 8:45 AM