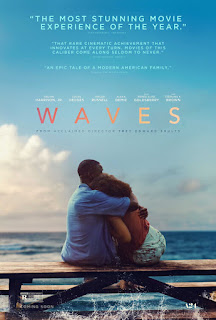 Trey Edward Shults is considered one of the up-and-coming writer-directors whose two previous features (Krisha and It Comes at Night) were well received, the former about a family dealing with one of its mentally disturbed members, and the latter about two families dealing with an alien invasion. Now, with Waves, Shults has chosen to portray family relationships in a middle class black family trying its best to achieve aspirations primarily defined by the father.  “We cannot afford to be average”, he admonishes his son when he is encouraging him to work harder.
The story is complex, reflecting Shults’ keen observations of family dynamics in ordinary as well as stressful situations.
Ronald (Brown) drives his son hard in his chosen sport of wrestling, coaching and working out with him and playfully competing.  Tyler (Harrison) is a sensitive young man who is attentive to his mother and plays the piano.  But he is also a fierce wrestling competitor with a future, it seems. This will all be made more complicated by his romantic attachment to Alexis (Russell).  When they have a major disagreement about an important decision, she breaks up with him, throwing him for a loop.
This is not Tyler’s only stress; he has developed a shoulder injury that threatens to end his hopes in wrestling.  The seriousness of the injury is explained to him by the doctor, but Tyler, in the family mode of keeping worries to himself says nothing to his parents.  Neither—interestingly—does the doctor call and talk to them about it.  (It’s unclear in the film whether Tyler is yet 18.)
And this is a place where I get on my bandstand about filmmakers repeatedly telling stories in which people don’t talk to one another about major events in their lives.  I realize this is not uncommon in real life, but films have a chance to model for their viewers the miraculous effects of open communication.  For instance, the tragedy that takes place in Waves could have been avoided had Tyler discussed what he was going through with his parents.  In the beginning scenes of the film, we have been set up to think that this closely-knit, affectionate family with good communication would have supported him emotionally and helped him in problem solving.
In a similar vein, it was unbelievable to me that this particular family would not have discussed birth control with their children.  When even vomiting is graphically portrayed, why would we not hear of birth control discussed with either adolescent in the family? Not much is said in the beginning about Tyler’s sister Emily (Russell), but after the tragedy, she becomes the focus in her relationship with Luke (Hedges).  Their friendship is portrayed as much healthier (although still no evidence of birth control), starkly contrasting with the one between Tyler and Alexis.
The actors are really fine in this film, some noteworthy for their previous accomplishments.  Sterling K. Brown (most notable for his award-winning performances in the TV series “This is Us” and “American Crime Story”) is convincing as a father wanting his family elevated to their true potential.  Renee Elise Goldsberry (known primarily for her Tony Award winning performance in Broadway’s “Hamilton”) plays the devoted mother and wife who takes loss so hard, she almost loses everything.  Lucas Hedges (nominated for supporting roles in Manchester by the Sea and Ladybird) brings a kind of peace and understanding to the story in his portrayal of a male who is sensitive, kind, and unbiased.
The two main characters in the first part of the movie are portrayed by Kelvin Harrison, Jr., and Alexa Demie, with Taylor Russell highlighted in the latter part. All of these actors, who are supposed to be in high school, are 25 years old.  There are enough talented teenagers to play these parts in movies, so I don’t understand why filmmakers consistently cast older actors to play their roles.  When the discrepancy is so obvious, it’s highly distracting.
Another distracting (and irritating) element in this film is the assault on the senses with sudden bursts of sound coming from whistles, voices, music, horns, and the quick cuts between scenes that have nothing to do with one another. Cinematographer Drew Daniels has inserted beautiful pure color scenes that enhance the mood of the film. These should be the guiding light for the editors (Isaac Hagy and Shults himself) in future endeavors.
Like many interested others, I will be following Trey Edward Shults in his future endeavors.

A gripping drama that highlights a black family’s struggle to achieve their aspirations.