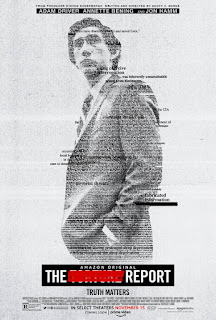 The dramatization of the U.S. Government’s reaction to 9-1-1 is outlined in Scott Burns’ movie, The Report, which focuses on the report prepared by Senator Dianne Feinstein’s Intelligence Committee, delegated to David Jones, one of her aides.  It shows the dogged five-year efforts of Jones to wrest documents from the CIA related to its practice of detention and enhanced interrogation techniques (EITs) to get information about when/where the next attack would be.
Gathering data for the report was impeded from the very beginning by CIA officials who refused to share most of their files. Adam Driver embodies the Jones character, eloquently expressing his patience, his diligence, and his intelligence in reading and interpreting reams of material amidst all kinds of setbacks.  Setbacks that never came from his boss, California Senator Dianne Feinstein (Annette Bening), however; as deliberate and politically aware as she was she was also clearly aware of Jones’ honesty and capabilities, so protects him and guides him in negotiating shark-infested waters.
The film charts Jones’ journey, highlighting his findings despite obstructions, the strategic use of subterfuge to make sure the report was seen and circulated, and the horrifying examples (some presented graphically) of what he found, including clear-cut examples of torture. The two psychologists hired as consultants—James Mitchell (Hodge) and Bruce Jessen (Smith)—had no experience in interrogation, at a time when the country had teams of FBI agents who were experts and should have been in charge of the program.  But, instead, Mitchell and Jessen were put in charge, implementing their unproven methods with virtually no checks or oversight.
It’s sadly ironic to learn that as early as 1978, the CIA had concluded that brutal tactics are not effective in getting detainees to talk; moreover, they typically result in false answers. The report showed that in their desperation following the 9-1-1 attacks, leaders in the CIA willfully ignored its own earlier findings.
I think this documentary is valuable in illuminating a part of our government’s history in which major miscalculations were made, hundreds were made to suffer—some to die—and there were proven injustices committed.  It’s pertinent to present-day situations, and one hopes we will be mindful of and remember what we learned previously.
My difficulty with the film’s presentation is the rapidity with which major players in the drama are introduced (without clearly identifying who they are).  Moreover, some subtitles meant to give the viewer context fly by so quickly, its difficult to see them and simultaneously follow conversations that are ongoing.  Although I think the film is basically a good one, director Scott Burns and editor Greg O’Bryant should have picked up on this during postproduction.
Adam Driver is consistently admired for his acting skills in many different kinds of roles including this one.  He conveys the carefulness shown by Jones, as well as his agony when he is being blocked and questioned.  Annette Bening is likewise highly skilled, but not as often recognized for it as she deserves.  Here, as Senator Dianne Feinstein, she captures the politically astute Congresswoman’s quiet, confident demeanor and decisiveness in tense situations, despite trying to navigate successfully through the sensitive politics of the situation.  These two leads are backed up by a strong cast including Jon Hamm, Maura Tierney, Linda Powell, Corey Stoll, Ted Levine, and others.

A real-life drama depicting the reactions of Washington’s politicos to the 9-1-1 disaster.