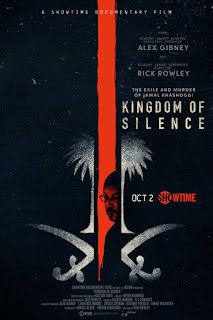 On the two-year anniversary of the death of the Saudi Arabian and Washington Post journalist, Jamal Khashoggie, a documentary by Rick Rowley, written by Lawrence Wright, will be appearing on Showtime TV on October 2, 2020.  It’s an overview of the events leading up to Khashoggie’s disappearance, highlighting the long-term relationship (from the 1950’s to now) between the U.S. and Saudi Arabia.

When Chevron began drilling for oil in Saudi Arabia up to the present day, Saudi Arabia has been considered a valuable ally of the U.S., primarily because of business interests.  When the U.S. was trying to drive out the Russians in Afghanistan, the Saudis became allies in war.  Up through all seven Presidents since, the U.S. has been a Saudi supporter, including giving military aid when the Saudis mercilessly attacked Yemen.  When it became clear that it was Saudi Arabians who were responsible for the 9-1-1 attacks on New York City, Saudi royalty were able to remain clear of any involvement, and the alliance between the two countries has continued.

Jamal Khashoggie’s role during these times? A native of Saudi Arabia, he was someone who always loved his country, but was outspoken in his support of democratic principles and young people’s right to protest in countries where democracy was being threatened.  Initially, he thought that Osama Bin Laden held to the same beliefs, and made special effort to meet and get to know Bin Laden when he was in Afghanistan. However, when Bin Laden’s role in 9-1-1 became clear, Khashoggie was disillusioned and broke away from him, later on supporting the U.S. war in Iraq.

Following that came the Arab Spring when major protests broke out in Egypt, and it seemed that some significant progress was being made against authoritarian governments in the region, but it was not meant to be.  With the support of Saudi Arabia, which viewed U.S. support of the protests against Mubarak with disdain, the democratically elected government of Egypt was ousted by a military coup.

Once again, Khashoggie had supported a movement toward democracy, but was on the wrong side as far as his home country was concerned.  He seemed not to be aware of the danger he was in, and proceeded to go on as before, even planning to marry a woman he’d become involved with.  As we know from the news at the time, it was presumed that Khashoggie was killed at the Saudi Embassy in Instanbul.  Although King Mohammed Bin Salman denies any knowledge of what happened to Khashoggie, he is suspected of being involved, and has maintained a “Kingdom of Silence.”

As a backdrop to Khashoggie’s story, Kingdom of Silence illustrates how America’s interest in oil takes precedence over the principles of democracy which we’re supposed to value, principles on which our country was founded.  Our support of a totalitarian government like Saudi Arabia repeats our history of siding with monarchies such as in Egypt, Iran, and numerous other countries, in order to protect U.S. business interests. The documentary explicitly questions these contradictions.

Written by Pulitzer Prize-winning Lawrence Wright, the film is cogent in its thesis of questioning King Mohammed Bin Salman’s actions and U.S. continued support of him.

An exploration into the disappearance of Jamal Khashoggie and Saudi Arabia’s suspected role in his demise.