THE WAR WITH GRANDPA 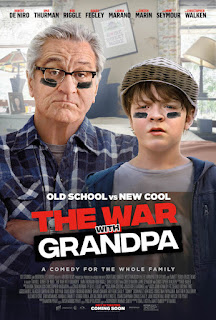 More than being funny, the movie’s to be admired more for the “arms” grandpa and grandson use to wage their war.  Peter (Fegley) is incensed when his mother (Thurman) decides that it’s too risky for her father to remain in his own home, and forces him to move in with her family.  For this to happen, Grandpa (De Niro) is going into Peter’s room, and he will be put up in the attic. After the boy pulls a few tricks on his grandfather to protest, Grandpa agrees they are at war, so based on his own experience in military service, he draws up rules of engagement that he and Peter agree to abide by.

That’s when the “fun” begins as each side pulls in buddies who egg each of them on. Part of the pact is that it stays secret; no one in the family is to know about it—war secrets in other words. Grandpa has in mind that this will be an educational lesson for Peter, and is unaware of his own competitive streak—even toward a kid.

Warfare involves what seemed to me to be fairly sophisticated electronics, mechanical knowledge (Grandpa is a former home builder), and, to them, hilarious booby traps involving a drone, manipulation of music LPs, remote control cars, rearranging snacks, spiking coffee, a snake, and on and on.  Sometimes by accident, the antics miss their target and affect other people.  But since Peter and his Grandpa haven’t revealed their war, no one knows they’re behind the tricks missing their mark.  In one satisfying sequence, the school bully who is consistently commandeering Peter’s backpack gets a trick blow-up in his face.

Tim Hill of SpongeBob SquarePants fame directs this film written by Tom J. Astle and Matt Ember, based on a book of the same title by Robert Kimmel Smith.  It succeeds but, as I say, more for the fascination of the warfare tools than for comedy; unless you’re one of those people who invariably laughs at pratfalls, and if so, you will find comedy here.

The film is not without some heartfelt scenes of family love, friendship, and honor. These are well done and are not too treacly, and often show the character learning something from experience.

Oakes Fegley (Wonderland, Pete’s Dragon) again proves his acting skills such that he was able to hold his own with the proven versatile skills of Robert De Niro.  The two together have a wonderful dynamic reflecting an emotional bond.  Uma Thurman chews up a role like this as easily as a practiced tennis shot.  She is convincing as a daughter, wife, and mother always steering a family sometimes going awry.  Not her fault but a flaw in the writing was one of the last scenes showing her tackling a teenager.  After her husband’s (Rob Riggle) multiple deferential statements about her, this was overkill.

I imagine this film will delight many families who like this kind of set-up and humor. I find it more in the realm of the kind of entertainment that appeals to many Americans more than more substantive fare.  For those liking movies like Meet the Parents, this will be a hit.

A war unlike any you’ve seen before.

Posted by donnarcopeland at 6:08 PM