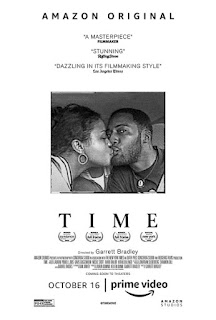 A young married couple desperate to make it and get ahead, go against everything they’ve been taught, and try robbing a bank.   As the teller of the story says, “Desperate people do desperate things.”  Not being experienced criminals, the two involved in the robbery are apprehended, of course. Sybil Richardson plea-bargains and gets 12 years and, by the way, she is three months pregnant with boys. Robert gets 60 years.  This is the story primarily about Sybil bringing up their six boys on her own, maintaining a strong connection with Robert, and using family and friends as well as her own considerable resources to survive.  She is relentless throughout in her efforts to get Robert released early, despite the restrictions of his sentence:  No parole, probation, or suspension of sentence.

Always with an eye for the future, Sybil recorded videos to show her husband of the family’s daily life when/if he gets out of prison.  These videos and additional photography by Nisa East, Zac Manuel, and Justin Zweifach, along with Sybil’s input are used by Director Garrett Bradley to comprise the movie.  The photography is iffy at times, such as the amateur videos of family life.  The camera jumps radically in some scenes, making it hard to see what is going on.  But the film is shot in black and white, which lends authentication to the basic story, and the photography provided by the professionals is extra fine.  Music (Edwin Montgomery, Jamieson Shaw) is another plus, especially the piano in the background (Emahoa Tsegue Maryan Guebrou).

Another problem with the film is the editing (Gabriel Rhodes), which is choppy and fails to keep the viewer oriented.  We see people whom we haven’t been introduced to or it’s not clear which child is in the camera (not being chronological, we can’t keep track of who is who).  This is particularly bothersome when we see an older son, but have no idea whether it is Remington, Justice, or Freedom.  The film notes that Sybil was rearing six sons, but I could only identify four; if Laurence and Maklik on the IMDB list of performers were in the film, I missed them.

Many questions arise about details during the film.  It was only an hour and 21 minutes, so the filmmakers could have included details such as how the robbery was conceived, what were the discussions about it, and the specific plan of actually doing it.  Did the protagonists have any criminal records? Who took care of the children while Sibyl was incarcerated?  We assume it is the maternal grandmother, but we see no scenes of that period of time.  A considerable part of the film shows Sibyl lecturing, but we’re not told what groups she is talking to.  She seems to have landed a job as a car saleswoman, but no details are given about when/how she got the job and how long she had it.

This is an instructive film for American citizens to see, and much of it is well done.  Sybil Richardson and her family are all attractive and well spoken (not the stereotypes of incarcerated people), and it’s clear they are “well brought up”; when she talks on the phone trying to get information from the justice system, Sibyl is inevitably patient, polite, and tactful, even when she is exasperated with its seeming apathy.  The family as a whole—including the maternal grandmother—are well portrayed and come through in a good light, as well they should.

The positive aspects of Time (an apt title) make this a film I think every American should see, in its highlighting the need for judicial reform, how the system as it stands is completely unfair to some, and the unnecessary destructive effects on whole families that can result when sentences are too harsh.  Despite its flaws, the nobility of the Richardson family and how they have coped are an inspiration.

Films like this should be shown in schools and detention facilities so that young people can see how a foolish mistake when you are young can have devastating consequences, and how important it is not to get caught in that trap.  Granted, that people of color are much more vulnerable than whites are to this dilemma.

This movie cries out for judicial system reform.  Overuse of incarceration is a problem for our country, and this film literally brings home the harmful effects of it on families, as well as what it takes to deal with it.

Posted by donnarcopeland at 8:02 AM