NOMAD: IN THE FOOTSTEPS OF BRUCE CHATWIN 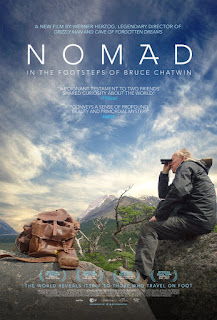 In this poetic documentary, quintessential documentarian Werner Herzog retraces the steps of a nomadic traveler, Bruce Chatwin, whose endless quest for every kind of strangeness in the world he could find took him to all ends of the earth.

Chatwin was a British travel writer, novelist, and journalist who, by way of the short-list for the Man Booker Prize for Utz, Sotheby’s in London, a stint at the University of Edinburgh, and the Sunday Times Magazine, decided to visit Patagonia in Argentina as inspiration for his first book, In Patagonia.  This fascinated Werner Herzog because of his similar interests.

Herzog and Chatwin had crossed paths from time to time, meeting in person in 1983 in Melbourne.  In making this documentary, Herzog relates some of his films to Chatwin’s wanderings.  He takes us on some of those journies, accompanied by haunting strains of music (Ernst Reijseger) and the arresting cinematography of Louis Caulfield and Mike Paterson.

It starts out with a piece of fur that Chatwin saw in his grandmother’s Victorian cabinet, which was said to be of a Brontosaurus, but actually turned out to be from a giant sloth.  This piece of fur, along with other items of interest, particularly prehistoric animals, captivated the young Chatwin, and he spent the rest of his life chasing its origins.

Herzog pulls in Chatwin’s wife, Elizabeth; his biographer, Nicholas Shakespeare; and numerous scientists, acquaintances, musicians, writers, and Australian tribesmen to elaborate on their perspectives of what Chatwin wrote and experienced. Much is made of Chatwin’s book, The Songlines, which became a best seller in the United States and United Kingdom.

This is a moving film about the intense connection between two very different men around their love of adventure and curiosity about the world.  For anyone who has even the faintest of desires for such travel, this will be inspiring, informative, and satisfying as second best to being there, especially for those of us unable/unwilling to undergo the rigor it would require. The promises of adventure, the exotic places shown, and the quirkiness of Chatwin (and Herzog, to some extent) will keep you entranced.