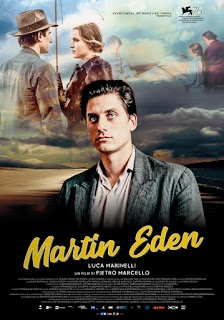 A period drama (early 20thCentury) that may not appeal to viewers of today. Although it might.  In the film, young Martin Eden (Marinelli) goes through struggles in his young and later adult years that involve wrestling with individualism vs. socialism—a contentious subject that is prominent in current news, with the Republican administration claiming (unfairly) that the Democrats are planning to usher in socialism.  Republican adherents are pulling out their guns (unnecessarily) against peaceful protesters of clearly obvious injustices.

The film depicts contentious arguments for and against unions, conflicts between the wealthy and the poor, and the ultimate value in education.  Maybe the story is not so far afield from today.

Martin is a man from a poorer background who has found the life of a sailor appealing to his sense of adventure and interest in the world.  One day by the seashore he finds an older man abusing a younger man and intervenes, knocking the older man down.  It turns out that the young man—Nino (Nemolato)—is from a wealthy family, who shows him gratitude by inviting him to stay for lunch, where each member of the family expresses appreciation.  On this occasion, Martin is introduced to Nino’s sister Elena (Cressy), whereupon he falls in love at first sight.

The story then follows their relationship, with her encouragement of him in educational pursuits, and his idolization of her and her status.  He wants to “come up” to her level in society and be worthy of her.  Education is an unpredictable mistress, however, and as Martin becomes more informed, he is pulled into a quandary more than once.

Perhaps stemming from his background, but also simply a function of his personality, he is hotheaded and often gets into scuffles.  Someone he meets who encourages this—at least in an intellectual sense—is Russ Brissenden (Cecchi), a hard-core socialist.  They become close friends, and Russ gives him a manuscript that he wrote in which he drew upon Martin’s work.

Martin Eden (script by Mauricio Braucci) is based upon a Jack London novel in which he claims to be critical of a Nietzschean individualistic point of view, but admits that most people regarded the novel as defending Nietzsche’s view against socialism.  The waters are muddy, as perhaps they are today in American politics.

The Martin Eden character is clearly a cynic, which might not appeal to the general audience.  The cast is strong (Luca Marinelli especially), but the writer and director (Pietro Marcello) were not successful in making succinct, clear statements about the plot and the characters.

This film will appeal primarily to those interested in period dramas with emphases on political thinking.

Posted by donnarcopeland at 9:41 AM