JUDAS AND THE BLACK MESSIAH 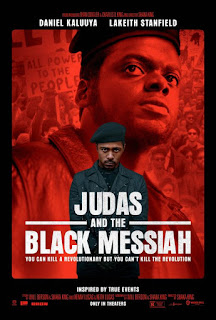 Betrayal of one’s own can be considered one of the most egregious of sins, and this film about the Black Panthers in the 1960’s does an excellent job in charting the beginnings of such a compromise, the experience of the betrayer, and some of the after-effects for the perpetrator.  The story is told from William O’Neal’s (Stanfield) point of view, and puts the listener in a bit of a dilemma, at least during the first part.  You see he is a hustler, but he has wits and charm, so unless you already know who he is, you might be drawn to him.

Fred Hampton (Kaluuya), the deputy chairman of the Black Panthers from 1966 to 1969, has a different kind of charm, one built on honesty, sincerity, and commitment to a cause for other people.  It’s easy to see why he might be a threat to the FBI at the time, being truly a black messianic figure who was winning over thousands of followers. He became the chairman of the Black Panthers in Chicago in the 1960s primarily because he was a skillful orator, an alliance builder, and recognized the needs and frustrations of Black people.  He was an earlier Black Lives Matter leader at a time much less receptive to such causes.

Director Shaka King and his team have created a very fine production that shines a light on a very dark time in U.S. history, outlining events and giving shape to the characters involved and what they were about in terms of their personal lives as well as the aims and workings of the Black Panthers.  It allows those of us who heard about them primarily in the news to fill in the gaps and see their human-ness beyond the revolutionary rhetoric.

Daniel Kaluuya has already achieved a reputation for his previous roles in Get Out and Black Panther, and he is winning accolades again for his performance here.  Those eyes! They tell so much of what he is intending to convey, that with his soft voice and purposeful carriage, he can deliver stunning performances.  In this film, my eyes were drawn more to the Judas character because it is much more complicated.  Stanfield portrays the divided loyalties and ultimate survival instincts of a traitor skillfully, showing the pangs of guilt and ability to deny facing up to possible repercussions of his actions.  Jesse Plemons—not an admirable character here, as in his other films—shows well the man who speaks the party line, ignoring his personal opinions.

Judas and the Black Messiah is of historical significance and instructive to those wanting to be informed about politics in the 1960’s, specifically in regard to the Black Panther group.

Judas and the Black Messiah is an account of the Black Panther group in the 1960’s, which highlights what it was up against with the FBI.

Posted by donnarcopeland at 9:00 PM