THE WORLD TO COME 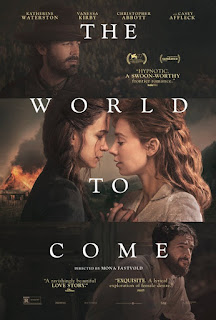 An admirable feat of artistic production, The World to Come takes us on an unexpected journey through two marriages in the 19thCentury full of grief and ineptitude lit up by an uncommon love.  The two couples live on isolated farms in New York.  We first meet Abigale (Waterston) and Dyer (Affleck) who live a seemingly ideal life on a mostly prosperous farm with their young daughter.  Well, it’s not really ideal; Abigale, a writer with keen sensitivities, finds her reticent, mechanically minded husband rather dull.  She is nurturing, and he values her care and tells her as best he can, but she clearly feels something missing, especially after the loss of their daughter.

Then one day her closest neighbor Tallie (Kirby) visits unexpectedly, and the two strike up a friendship.  Their conversations are typical of housewives of the time, and inevitably touch on their husbands.  But there’s a spark, a spark that is felt not only just between the two women, but it reverberates outward through their small group.

The writer Jim Shepard is known for his wide-ranging research of subjects he’s interested in as well as his fascination with difficult-to-explore emotions. Most striking in The World to Come are the number of times husbands and wives cannot seem to express what they’re feeling.  For the women, it’s circling around without committing too much; for the men, its terse monosyllabic utterances.  The way out in this story are the poetic musings of the women when they talk with each other when they’re alone.  And by the excitement the women feel when they meet contrasted with the pedantry characteristic of the men’s conversations when they converse and even when they talk with their wives.  Much of this production’s success lies in Shepard’s capturing the emotional valence among the characters, leaving the viewer in suspense.

Director Mona Fastvold’s skillful assemblage of actors and crew for the production should earn her a place among the up-and-coming filmmakers, along with her sense of pace and sustaining suspense in the plot.  Katherine Waterston, Vanessa Kirby, and Casey Affleck are by now well known for their skill and attraction as leading actors, and they with Christopher Abbott deliver the kind of performance called for by the script. A significant contribution is lent by the musician Daniel Blumberg, with his dirge-like ominous tunes alternated with Andre Chemetoff’s  beautifully rendered pastoral sequences to capture the landscape and give us some relief

This could have been a totally depressive film, but the lyrical—sometimes elegiac—dialog and cinematic crafts elevates it to something beyond, something more like a tonal poem.  It’s certainly not tied solely to a 19thCentury story; it speaks to our wonderings and speculations about marriage today.

This is a film for lovers of art and poetic expression capturing psychological truths about human nature through the ages.

Posted by donnarcopeland at 9:28 PM