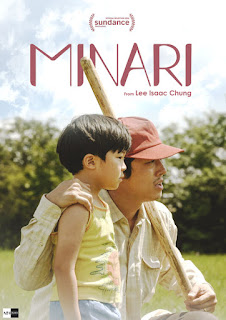 Minari is very much a true-to-life story of a family from Korea trying to achieve their dreams on a farm in Arkansas. Writer/director Lee Isaac Chung weaves into a complex mosaic all the many experiences of immigration, including the blending of cultures, marital disagreement and conflict, cross-generational attempts to understand, differing religious beliefs, the complications of aging, and—to top it off—the seeming capriciousness of weather.

Right from the beginning, we see that Monica (Han) disagrees with her husband Jacob (Yeun) about uprooting the family from California where they both worked in a dull chicken processing company in favor of buying land for a farm.  He feels stifled and wants to achieve something more, but her biggest concern seems to be about their young son who has a heart condition.

As if that were not enough to worry about, Monica wants her mother (Youn)—who is pretty much alone in Korea—to come live with them.  Not only does she miss her mother, she knows it will be advantageous to have her as a babysitter for David (Kim) and Anne (Cho).  It means that the household will be crowded in a mobile home, and David is resentful about sharing his room with his grandma who snores, smells strangely, and has weird ideas and unorthodox behaviors.       David simply can’t understand having a grandma who doesn’t make cookies and who swears.

The strength of the movie lies in its demonstration of the adaptability of humans in objectively difficult situations to accommodate one way or another. The family does get some moral support from the locals, which helps; and it’s nice to see a film show how Americans can be welcoming to immigrants.

The actors—especially Steven Yeun with his expressive face—make up an ensemble that presents an utterly believable family, with conflicts alternating with loving support, particularly in a crisis.  Noteworthy is young Alan Kim as David, who clearly shows what he is thinking and feeling from disgust to sheer enjoyment and mischievousness. Director Chung can take claim for much of the cast’s success in his impressive direction, for which he won both the Grand Jury Prize and Audience Award at Sundance Film Festival.

This is a quiet, emotionally profound drama with so many complicating elements woven in it makes for a captivating story that will hold your attention.

Posted by donnarcopeland at 9:05 PM