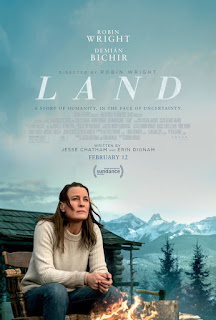 Unexpectedly, a beautiful story of love lost and found—but not in the usual sense. Robin Wright has long been one of my favorite actresses, and now she proves her talents in additional ways.     Congratulations to her for directing her first feature film, which reflects her sensibility in choosing this particular one.

The first scene is remarkable for setting up the story.  Edee (Wright) is in a therapist’s office without much hope of it helping her.  She has come as a favor to her sister Emma (Dickens) after a trauma she can’t seem to work through.  She soon comes up with her own solution, which wouldn’t make sense to most of us, but is psychologically sound, given what we learn about her later.

Edee chooses to buy property in the mountain wilderness of Wyoming sight unseen. After she is guided there by the realtor on her first visit, following her chucking her phone, she sends him away, saying in response to his concern, “I’ll be fine.”  Her first upset occurs when the city girl cannot find a can opener at dinnertime.

How on earth, you wonder, is she going to survive?  The story of that and of the myriad dangers she encounters is the heart of the film.

To counteract the spikes in apprehension and bouts of misery, Bobby Bukowski’s cinematic, probing photography and the lyrically soothing music of Ben Sollee and Time for Three, buffers our experience of a deeply human story that could be depressing.

But part of that story is seeing Edee learning how to do for herself in isolation: fishing, hunting, repairing her cabin—making do.  But “no man [or woman] is an island”, and everyone needs others at some point. That is where Miguel (Bichir) enters the picture.  Bichir is the perfect actor for the role with his Hispanic/American Indian appearance, his unassuming manner, and purveyor of genuineness.  At one point, when she asks him why he was helping her, his reply is, “You were in my path.”  The two work out the definitive boundaries about what notto ask each other.  And although he honors this to a T and is willing to share a bit, she remains adamant:  No news of the outside world.

The movie Land has many truths, with a well-written script by Jesse Chatham and Erin Dignam, who provide points of view from both male and female perspectives.  (Another appeal, I’m sure, to Robin Wright.)  This could easily have been a “chick-lit” film, but avoids that by making both sexes heroic.

This is a film for everyone, really, and might make an interesting conversation piece for those choosing it for their date night flick.