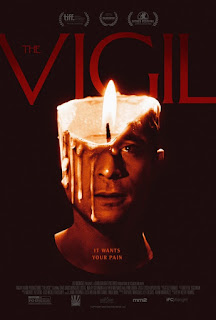 Yakov (Davis) is in a rather fragile state as a result of a traumatic event and subsequent stay in a protected Hassadic Jewish community.  Those around him are supportive and helpful in guiding him through the transition back into normal life.  He assures them he is just fine, only strapped for funds.  When his old rabbi and friend offers him a chance to be a shomer (someone staying with a dead body overnight to protect the soul from demons), he takes the opportunity to earn some money.

What will transpire during that fateful night is truly horrifying.  Eerie sounds and sites are intensified by Michael Yezerski’s music and Zach Kuperstein’s cinematography.  It’s difficult to tell sometimes whether what we’re seeing/hearing is only in Yakov’s mind or actually occurring.  These boundaries are often blurred and it’s sometimes hard to tell if the wife of the deceased, Mrs. Litvak (Cohen), is sane or not.  She is introduced as being demented.  But after the deceased’s demon—while he was a prisoner at Buchenwald and currently—begins to haunt the house, she seems quite intact.

Dave Davis as the main protagonist does a great job in moving among the many psychological states his character transverses, and it is these manifestations that are on-screen most of the time.  Lynn Cohen is a good match in evincing someone we’re never quite sure of the whole time, weaving in and out of the unreal and a normal kind of nurturance.  She and Davis show convincing chemistry that heightens the story’s interest.

This first feature by writer/director Keith Thomas is good at playing with the viewer’s own sense of reality and the boundaries into fantasy—as successful horror films do.  The weaving in of psychiatric disturbance makes the sorting out even more challenging.  It hovers just below going over the top in drama and unbelievable coincidences to make it a good mystery/thriller.  Some minor loose ends made me wonder, such what happened to Yakov’s backpack after he entered the Litvak house, how Sarah got Yakov’s phone number in order to text him, when she had only given him hers, and how it was that we heard Dr. Kohlberg on one phone call with Yakov trying to call him down, and then on a later call as if he hadn’t talked to Yakov at all.

The Vigil is full of the usual nighttime horrors, and has enough of a good drama that fans of the genre are likely to approve.