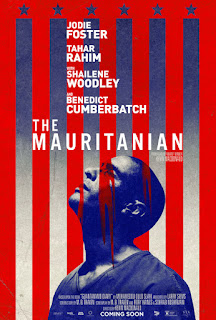 “This is a true story” we are told at the very beginning.  That was smart to insert that sentence, because in the course of its telling, it’s so hard for most of us to believe what we see. We’ve certainly read/heard accounts of what took place at the Guantanamo Bay Detention Camp, but to actually see it (what we see, of course, are actors playing the roles) as it was occurring is another thing altogether.

We are introduced to one of the inmates before he was captured, when he was visiting his family after being away.  He is charming and likes to crack jokes, but we can also see that he is thoughtful and smart, having won a scholarship to study in Germany when he was a teenager.  Clearly, he has a close relationship with his mother, and when he is called away from the party, he reassures his worried mother that he will be back.

But that will actually be a much longer time than he realizes, because he gets arrested, flown to black sites around the world, and eventually ends up in Guantanamo.

When lawyer Nancy Hollander (Foster) is approached with the case, her law firm discourages her from taking it, but being committed to civil rights, she takes it on with the sole intention of seeing that the accused (Mohamedou Ould Slahl, played by Tahar Rahim) gets a fair defense.  She invites one of her younger colleagues, Teri Duncan (Woodley), to join her.

By chance, when she is visiting Mohamedou in Guantanamo, the lead prosecutor Stu Couch (Cumberbatch) recognizes her in an airport shop, and the two have a drink and short chat with one another.  This is before either of them has been given files to read in preparation for the trial.  When these files are made available to them, they discover that they are so redacted, it will be impossible for either of them to make their case.  It turns out that they are going to have to go through the courts to get the unredacted files.

Director Kevin Macdonald is skillful in telling a story on film, using timing and informational material to greatest effect in keeping the viewer attuned and in suspense.  He has proved this in his previous films (e.g., State of Play, and the documentary Touching the Void); and in Mauritanian, he exploits these features so that we must endure frustrations and the trying of patience right alongside the characters.  Some of the brutal scenes are so realistic, I imagine many will turn their heads to look away, as I did.

The cast is strong.  Jodie Foster is entirely believable as someone who is serious and committed to the principles of her profession.  Shailene Woodley, whose character calls for more emotion is likewise authentic playing a younger attorney who clearly admires her superior.  It’s a surprise to hear Benedict Cumberbatch with a Texas accent, but he pulls it off nicely within a personality long trained in the military.

A graphic tale about prisoners held by the Americans at Guantanamo Bay in Cuba.

Posted by donnarcopeland at 9:18 PM