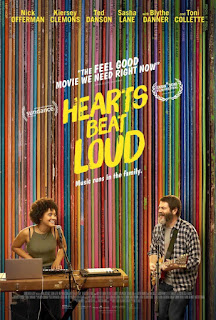 Hearts do beat loud in this Indie gem about a different kind of father-daughter relationship from what we’re used to. After her mother is killed in a bicycle accident, Frank (Offerman) provides a home for their daughter Sam (Clemons).  They are close, but their most satisfying bond is playing music together.  He has a struggling record store (yes—vinyl LPs), and she is a senior in high school taking pre-med courses.  He is laid back; she is serious.
Frank has to wheedle his daughter away from her studies to jam with him, and she indulges him on occasion.  Once, she plays a riff on a song she has composed, and they make something of it.  Unbeknownst to her, he puts it on Spotify, and lo and behold he hears it on a mixed tape at the coffee store.  This is all he needs to spur him on and plead with his daughter to pursue a career in music.
What plays out is unique in the world of cinema; it’s a true-to-life drama that is realistic and plausible.  I congratulate the director and co-writer Mark Basch on their accomplishment in creating a fiction that is gripping AND could very well be true. It could have been dramatized so differently in terms of Frank losing his business, his relationship with his landlady (Collette), his daughter getting involved in a relationship with Rose (Lane), etc.  But the filmmakers kept their feet on the ground and gave us a delightful story about one father and daughter.
In addition to the script, the actors are superb—one of the best performances by Nick Offerman I’ve seen—complemented by Kiercey Clemons, a talent we will be sure to see more of.  Collette, Danson, and Danner have cameo roles that sync with their reputations, and Sasha Lane is a rising star with talent and charisma.
I appreciate the film for addressing the issue of going for the long-term basic value (pursuing a medical education) versus taking a chance on a music career with promise.  Another strength of the film is portraying a middle-aged man discovering his need to rely upon himself, and his social skills deficits.   Detracting from it are a few clichés like “You gotta be brave before you can be good.”
But fundamentally—and in all the important considerations—this is a good, soulful movie that empty nesters and well as others will enjoy.

An inspiration for father-daughter relationships.