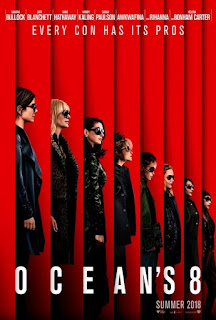 This clever, fun heist movie will engage you, intrigue you, and keep you entertained. Debbie Ocean (Bullock), sister of Danny (George Clooney) in previous Oceans movies, is just being released from prison after serving five years. She bounds out in the same outfit as when she went in—dressed for the evening in a trendy black outfit—assured that she can go anywhere and do what she wants with the $45 in her pocket. And we see how she begins to do just that with her light fingers and made-up stories as she ensconces herself into a fancy hotel and gets in touch with her seven specially talented friends and accomplices, the first being Lou (Blanchett), an Australian motorcycle enthusiast and sharp observer of human behavior
Debbie has used her time in prison well, figuring out detailed plans for living up to her family name, exacting a delicious revenge, and getting a ticket to the high life for life.  Debbie and Lou flesh out a strategy for a major heist of jewelry at one of THE social events of the year, the Met Gala, hosted by the iconic Vogue Magazine editor and artistic director of Conde Nast publications, Anna Wintour who appears as herself in the film.
Debbie and Lou assemble a motley team of thieves, smugglers, fashion and jewelry designers, forgers, and computer geniuses to play their roles in an intricately choreographed dance designed to net them all a sizeable share. What are they after? Cartier’s 150-million-dollar diamond necklace.  It will involve managing to get just the right celebrity to wear it to the ball.
Some of the funniest scenes include the eccentric fashion designer Rose Weil (Carter) flattering the always-aspiring celebrity Daphne Kluger (Hathaway) to go along with the plan to wear the necklace.  (Not hard at all, once she sees it.)  To watch Hathaway acting out preening and self-love in brilliant red lipstick in front of the mirror as she tries on various necklaces (the real diamond one is held out as a tease) will surely make you groan and laugh at the same time.
Also engaging are glimpses into the current lives of the fellow co-conspirators. Tammy (Paulson) is a contented mother who buys tens of bicycles on eBay when she has only one child.  Nine Ball (or “Baller”, if you prefer) (Rihanna) is a wizard on the computer, and most of the fun here is seeing others having to catch up with her; and like any good Asian has a relative, April (Midori Francis), to come through at a crucial time.  Mindy Kaling, as Amita, the jewelry designer, is trying to find a partner on an internet match site, but she will amuse and impress you with her rather naïve pronouncements coupled with design efficiency.  Constance (Awkafina) always shows up just in time, and even though she is simply collecting and sorting things, you smile at her dedication.
In Oceans 8, Director Gary Ross demonstrates his sensitivity toward women’s important issues, his delight in mixing up craftiness and comedy, and his flair in infusing excitement into a rather predictable plot.  The journey there is the point, and it will serve as a good time to relax and simply enjoy.
This Oceans’ cast impresses with its unwavering skill and art.  The major protagonists and supporting actors deliver what we hope for and expect in a film of this kind.  Bravo to all!

This is a great movie for kicking back, relaxing, and letting the irony and truthfulness amuse you.