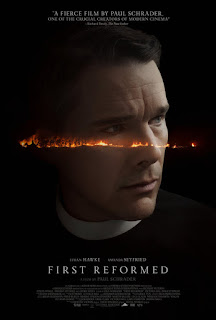 This is one of those independent films that you hope will be coming up regularly forever. It takes an issue and argues it with eloquence and passion, showing both sides.  That is, the audience is expected to take some responsibility for thinking about something important and reasoning through it to conclusion. Pastor Toller (Hawke) has a known past of having a son he talked into going into the military (generations of his family had attended VMI)—against his wife’s objections—and, unfortunately, Joseph was killed in Iraq.  The burden of this kind of guilt is the subject of the film, and it’s put into larger contexts related to political activism, religious beliefs and meaning, and, fundamentally, hope and despair.
Pastor Toller seems to be experiencing PTSD (post-traumatic stress syndrome), and trying to work through it, using scripture and group therapy, and a diary that is to be destroyed in one year.  Adding to the pressure is that he is pastor of a 250 year-old church, which tries to survive by joining a much larger congregation, the Church of Abundant Life, led by Pastor Jeffers (Cedric the Entertainer).  They’re all gearing up for the celebration of the re-consecration of First Reformed.  Here, we see the issues of original conceptions of religion played out against the current capitalist conceptions of a religion paired with financial backing.
The First Reformed Church has to collaborate with the Church of Abundant Life in planning.  At first, there doesn’t seem to be much of a problem; Pastor Toller has met with Pastor Jeffers a number of times, and they seem to be on the same page.  But the primary contributor to the Abundant Life Church is a businessman with a moral center that differs significantly from Pastor Toller’s.
And inserted into all of this is a major complication in the form of parishioner Mary (Seyfried) asking for help from Pastor Toller for her husband, Michael (Ettinger).  He is an activist for the environment, and has strong feelings about bringing a child into the world.  (Mary is pregnant with their child.)  He wants to abort the child, but Mary does not.
Pastor Toller is drawn into this dilemma, which exquisitely connects with his own dilemma he is already dealing with; that is, a parent’s responsibility for a child’s life.  Michael is troubled that he is bringing a child into a world that will eventually kill him, because of environmental neglect.  (The oceans rising several feet, for instance.)
Paul Schrader, the writer/director of this film, eloquently outlines the agonizing questions of our day related to climate change, personal responsibility, and political activism, and demonstrates how individuals and families can be affected.   The ending of the story is drawn out, culminating in a conclusion that may be dissatisfying for many.
First Reformed is an outstanding production overall.  Schrader is an expert in storytelling and visual effects.  He and cinematographer Alexander Dynan open the film with an old white-boarded church scene suffused in a pale blue light; and these colors are seen throughout, with accents of black, bright red or other colors inserted for maximum emotional effect in certain scenes.  Ethan Hawke—in his usual fine form—gives one of the best performances of his career, complemented by Amanda Seyfried as a sincere young parishioner and Cedric the Entertainer as an experienced pastor of a large, well-connected church.

An impressive film in all aspects of filmmaking.