SON OF THE SOUTH 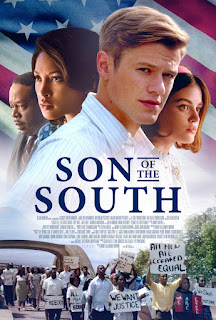 This is a movie like many we’ve seen before about the blatant racism of the Deep South during the time of the early civil rights movement in the early 1960’s. It’s based on the memoir (The Wrong Side of Murder Creek:  A White Southerner in the Freedom Movement) of Bob Zellner a young man at the time who lived in Alabama and was bound for college in the north, but kept being drawn into the movement by activists and circumstances.  He’s an older man by the time of movie preparation, but was consulted on the script by Barry Alexander Brown and Constance Curry (co-author of the book).

Bob Zellner (played by Lucas Till in a fine performance) simply wants to visit a local Methodist Church for information for his high school essay, and ropes in a few of his friends to go with him.  He seems very neutral, having been brought up by a father who left the KuKluxKlan after a sojourn in Russia where he became acquainted with Negroes and a grandfather (Dennehy) still wholly committed to the Klan, and Bob is now ready to make up his own mind.

But in the Sixties, it was almost impossible to remain neutral; either one was for or against negroes, and it’s chilling to listen to the hatred toward black people spewed out by southerners in the film.  We see some of Bob’s friends gradually fade away as he makes new friendships that are more meaningful for him.

As a result, in his openness to new ideas and people, Bob is transformed, although not without some pain and suffering.  The movie does a good job in illustrating the divisions among family and friends when race becomes such an urgent issue.  It’s odd for our ears to hear “you can’t kill him because he’s [white and] from Alabama!” and to see the division among life-long southerners when confronted with this dilemma.

Son of the South is not quite successful in at least a couple of ways.  One is that it is more of a revisiting of an issue rather than something new that we’ve never seen before in so many films (Just Mercy, Selma, Loving, Get Out, Fruitvale Station, e.g.).  (Not that I’m saying we shouldn’t be reminded; it’s still moving to see the film.)  The other is related to the script and to the actors not sounding like real people.  At times, it’s like listening to actors reading a script in the first round. The experienced actors have no problem, but others clearly sound like they are reading for an audition.

A film to remind us of the struggles and heartbreaks activists endured in the Civil Rights Movement.

Posted by donnarcopeland at 5:14 PM