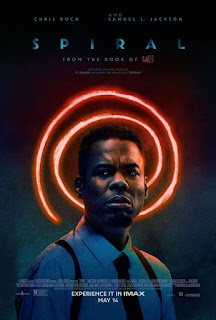 As the film explains toward the end, a spiral is symbolic of change, evolution, and progress.  Of course, this typically refers to the spiritual development of a human.  In the context of Spiral the movie, it does symbolize change, evolution, and progress—but in a distinctly different sense.  One of the first messages received is “I’m here to help reform the police.”

When the movie starts, we’re immediately pitched into a torture scene—one of many that will follow as a deranged killer leaves his trademark of a spiral and delivers ominous messages and ghastly mementos to Detective Zeke Banks (Rock).  Right away, it becomes clear that Banks has earned the enmity and scorn of his fellow cops in the South Metro Police Department, so even though he’s assigned lead on this case, he’s not always getting cooperation from his associates, although Chief Angie Barza (Nichols) seems to understand him better than the others.

The rest of the movie has all the devices commonly used in the horror genre—a series of startling frights and mysterious puzzles, confounding all those trying to wrestle with the situation.  We get a bit of father-son drama between Det. Banks and his father, (Jackson), the previous chief of the department.  These two characters are only fairly developed, but Rock—normally a comic—shows his skill as a lead actor in drama.  Jackson’s role is more as supporting actor, but his character is referred to frequently enough throughout the story, we get some sense of who he is.

Director Darren Lynn Bousman and writers Josh Stolberg and Pete Goldfinger and some of the crew in this film have previously worked together on Saw franchise movies, this being the eighth.  (Bousman directed Saw II, III, and IV.)  Still another Saw is in the works, and Spiral is clearly set up for its sequel.  Obviously, despite their gore and redundance in plot, fans continue to favor them.  On the other hand—partly because of the gore and repetition—they have not been well received by critics in general.

As a critic, I am in sync with my colleagues.  Although this version of Saw might be novel and even entertaining to a newcomer, I have to question the worth of seeing one grisly torture/murder after another—just  for the sake of being gruesome—in a shole string of films. This series seems to have run its course sometime back, making the prospect of doing two more particularly odious.

Spare yourself another movie intended solely to gross you out, without much of anything to redeem it.

Posted by donnarcopeland at 9:30 AM