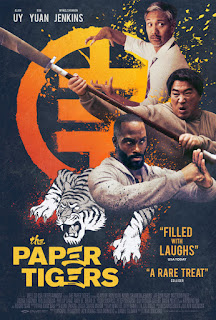 This is a kung fu action movie like you’ve never seen before, most likely.  Three middle-aged men who had special status in their youth for being the chosen of their master teacher, (“the unbeatable Paper Tigers) feel bound to defend the honor of their idol after he has died, despite the fact that they have not kept up with their martial arts skills, nor their relationships with the teacher, and are mostly involved in their paying jobs.  When prodded, they feel guilt about having abandoned the master, and now that he has passed and wanna-be kung fu fighters unmindful of his teachings and the principals behind them, they resolve to step up to the plate.

We learn more about one of the stars, Danny (Uy), who is trying to hold up his part of the bargain he made with his ex-wife to be involved in his young son’s life—and not doing a very good job of it.  Hing (Yuan) is notable for a major problem with his leg, despite which, he manages to step up whenever there is a challenge, but he is the one who has taken it upon himself to get in touch with the other two to remember the master.  Jim (Jenkins) is still envied because the master (who was a cook) always gave him the best piece of chicken.

Kung fu challenges are presented by a former acquaintance of the three, Carter (Page), who had a reputation for being inept, but has secured a high-level position at the former master’s school.  An even bigger challenge is made by a dangerous local punk (Okumoto) who has learned kung fu, but has not taken on the principals of honor that are supposed to be a part of it.  It’s said he is a part of the urban criminal underworld.  Indeed, the successor to the master Sifu has been murdered, and his predecessor may have been as well.

Paper Tigers is the first full feature film written and directed by Quoc Bao Tran.  He’s been involved in a number of aspects of filmmaking, but mostly shorts and television. shows  He will most likely improve across time, but for now in this film, writing and character structure are treated superficially and stretch plausibility.  Most glaring in this respect is that three out-of-shape middle-aged men could expect to take on the younger kung fu specialists.  The issue of their confronting aging and ways of coping with it are completely ignored.  Left hanging is the obvious conflict between Danny’s and his ex-wife’s positions about fighting.  She is clearly a pacifist, whereas Danny believes strongly that fighting is necessary at times, and he is committed to teaching his son certain skills.  If the movie had dealt with this conflict and had fleshed out the characters of the other two Tigers, I think it would have been a much better movie.

A kung fu movie that stretches plausibility in its older protagonists taking on their youthful heirs of the martial arts.