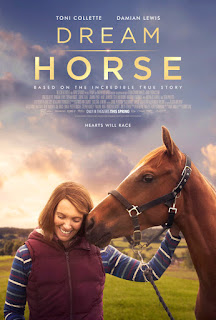 This film is just what you hope it will be; an inspiring story of a horse and its owners coming into their own through a bit—or perhaps a considerable amount—of trauma.  Additionally, it’s based on a true story.  I like the way the movie opens with Jan (Collette), a middle-class woman in Wales, working several low-level jobs, trying to get her older husband Brian (Teale) out of the TV chair at home, and taking care of her parents. When suddenly she gets inspired.  It seems there are a number of citizens who could use more zest in their lives.

Jan had won awards as an animal trainer in her earlier days, and when she came across an advertisement for a mare, something inspired her to look ahead and realize her vision of a racehorse.  She works in a grocery store as well as in the local bar, so she is well acquainted with the townspeople.  When a new person shows up, a certain Howard Davies (Lewis), the owner of the bar fills her in on his shady past (including considerable debt in betting on horse races), she makes note.  As she takes his order, they have a cryptic conversation, but something clicks between them, and when he hears later of her purchase of the mare, he engages her.

That encounter leads to their formation of a syndicate of townspeople to buy stakes in the offspring of the mare who is expected to breed with a sire of racehorse pedigree.  The filmmakers present us with colorful townspeople who buy into the project, as well as vignettes about Jan and her husband and Howard and his wife.  I could, however, have done without the scenes of an older man having trouble getting his clothes on and keeping them straight—an attempt at some comedy, I suppose, that just didn’t succeed.

Eric Wilson’s cinematography and Jamie Pearson’s editing work together with the story to present a thrilling tale of tight horseraces being held in vista-like settings with windmills often a part of the picture.  Toni Collette is inevitably a fine actress showing all kinds of emotions with her face and her body and stepping up to be assertive when need be.  Damian Lewis strays from his usual fare of British dramas and political thrillers to play an upper-class stock trader comfortably hobnobbing with the small-town group.

Townspeople banding together in a heartwarming tale of a shrewd woman’s keen eye in looking for a winner.

Posted by donnarcopeland at 7:49 AM