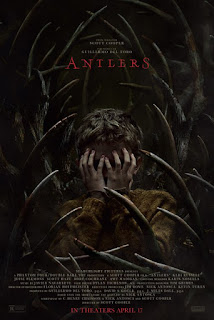 Be prepared; this is a scary shocking movie.  I was heard to yell out quietly twice.  Music by Javier Navarette, cinematography by Florian Hoffmeister, and production design by Tim Grimes set the stage, along with creepy and disturbing sounds that aren’t always identifiable.  Helmed by director Scott Cooper, the filmmakers have created a film that is successful in a number of respects, in addition to the above.

For instance, the background of the two main characters, brother and sister Paul (Plemons) and Julia (Russell), includes child abuse, which gives them insight into the events they are discovering.  She is a dedicated teacher who picks up on signs in Lucas (Thomas), a student in her class, that everything is not all right at home.  And Frank Weaver (Haze) has a reputation and history in town that makes his current situation seem plausible.  Mix into these aspects Wendigo Indian mythology and you have the makings of a true horror show.  Producer Guillermo del Toro’s influences on production are palpable in a good way.

It’s great to see Keri Russell after her long stint on television in “The Americans.”  She brings some of her character, Elizabeth Jennings, from that series into this production with her inquiring mind and clarity of vision and purpose.  Even though he is a sheriff in their small town, her brother Paul has a tendency to deny what is in front of him and seek less troublesome explanations of events, but Julia goes right past him, at times doing some investigating on her own.  Plemons is to some degree effective in his role, repeating some of his others, namely Jake in I’m Thinking of Ending Things from a couple of years ago and Gary in Game Night, a 2018 movie, in which he seems a bit clueless.

A stand-out is young Jeremy T. Thomas as Lucas, the child who is subjected to peculiar horrors on a daily basis and has come to realize that the role of parenting is on his shoulders long before he is ready.  His face and demeanor reflect all the emotional distress, fear, intimidation, and calm confidence that he is meant to display, and Thomas  appears to be a natural.

I have a complaint in almost all the horror movies I see, that characters do things I would call foolish—even dumb.  After hearing sounds that should alert them to danger, they blunder right down into a dark cellar, out into the dark night, and in this case, opening a front door that no one has answered, behind which animal-like noises are heard from within.  These characters never ask for reinforcements before entering, often without a gun or even a flashlight.  Those scenes take my brain right out of the fantasy into a more practical mode.

Antlers is largely effective in achieving the aims of a horror flick that will set the viewer’s teeth on edge and tap into primordial fears common of most.

A horror movie weaving in mythology, child abuse, and mystery into a gripping tale.

Posted by donnarcopeland at 7:38 PM