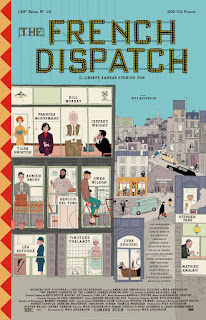 Wes Anderson’s stamp (wry humor, meaningful free association, characters in caricature, intrigue/mystery, curiosity, folksy drama, to name a few) is all over The French Dispatch, a group of stories about a Frenchified newspaper in Lawrence Kansas with that name owned by Arthur Howitzer, Jr., after his father, the founder of the publication died.  The first scenes of what look like a painting of a French village are captivating for both their artistry and the action figures that move within them.  The pictures represent the town of Ennui (pun intended), which has endured all kinds of crises during its existence.  We get to hear about some of those in this fanciful production.

Another Anderson stamp is his continuing to engage actors and crew from his previous movies.  It gets to be another fun part of watching one of his films—identifying all the scores of actors who have appeared in his previous works.  Anderson puts them in completely different roles from what you would expect.  For instance, Tilda Swinton as an art curator is made up to look strikingly like Sofia Loren.  Well-known artists like cinematographer Robert D. Young and musician Alexandre Desplat are likewise regulars, playing essential roles in conveying the experiences Anderson wants you to have when viewing his films.

The French Dispatch will not be to everyone’s taste, even for those who are fans.  Unlike his previous films, there seems to be no overarching point to this one.  It’s more like one where you just sit back and enjoy hundreds of moments in time with interesting people and situations that will somehow be recognizable to everyone.  The dialog is so sharp and fast-moving, I wished I had had a script in front of me or already read one where I could stop and savor the import of every scene.  It all goes by very fast.

It’s curious at times to observe the dominance of women in this production.  Lea Seydoux does an exquisite rendition of a model/guard/dominatrix of an artist named Moses Rosenthal (Benecio del Toro), who is in prison for murder.  (Think of all the associations it took to come up with that image.)  Moreover, older women like Upshur ‘Maw’ Champette (Lois Smith) appear in decision-making scenes, and Lucinda Krementa (McDormand), a middle-aged writer for the Dispatch is shown in bed with young student activist Zeffirelli (Chalamet).  These encounters—like all others—are presented as droll pictures of a normal world.

When Anderson seems to be spoofing or even criticizing things is not always clear.  For instance, he often shows characters smoking.  Now, Anderson does not smoke and thinks it’s bad for people, but he says, “It looks good on film.”  That is frequently seen in this movie, and, true, it often looks good; but there are also instances where he seems to be making some kind of point, say, about student protests or government agencies.  Maybe he’s leaving it up to the viewer to make up his/her own mind.

As much as I love Wed Anderson films, I doubt this one will be a blockbuster.  I certainly enjoyed it and would like to see it again—maybe even read the script—but it is likely not to appeal to all Anderson fans, and certainly not to the general public.

A quirky Wes Anderson film with a collection of stories that will only be savored by some.

Posted by donnarcopeland at 4:16 PM