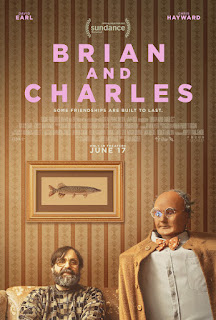 Brian (Earl) is an inventive soul whose house in Wales looks like a laboratory made from whatever he can find and bring home.  He’s even made a cuckoo clock that can fly so the townspeople can check out the time in the sky wherever they are.  Then one day he decides to make a robot to help him around the house,

Finding most of what he needs on hand or searching through trashes, where he has found a mannequin’s head, Brian is delighted with his newest invention.  After several tries when it fails to respond to the on-switch, Brian is about to give up.  But when he returns home from a village errand, he is surprised that Charles (Hayward) has come alive!

The fanciful tale weaves through the two getting acquainted and struggles of wills that soon come to the fore.  Soon it becomes apparent that Charles is very much like a very young boy but with a “mind” of his own.  To Brian’s chagrin, Charles does not want to follow commands.

After the gist of the plot becomes apparent, the action sags a bit; however, Earl and Hayward, the two writers, introduce not only an unlikely romance, but also a development in which Brian and Charles are subjected to bullying by one of the locals and his unruly family.

This gives the filmmakers an opportunity to make some statements about tolerance and nonviolence, giving the story relevance in today’s world.  It will be appealing to those who appreciate wry British humor and imagination without the need for logical explanations.  Cinematography by Murren Tullett adds to the charming nature of this film, which children may especially like.

A fanciful tale about an obsessive inventor who has come up with an idea for a robot.

Posted by donnarcopeland at 6:24 AM