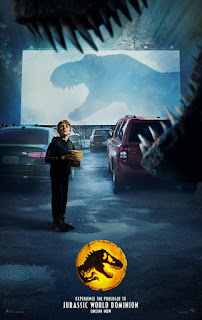 There are plenty of thrills and chills in this production, and if you like chases of one kind or another (cars, motorcycles, dinosaurs), you’ll be especially pleased.  Much of it is over the top with screams, screeches, dark scenes, and rapid-fire camera movements.  In that sense, special effects and action over-ride the story, most of which is about characters trying to get out of horrifying situations.

Picking up on Jurassic World: Fallen Kingdom (2018), we meet up again with Owen (Pratt) and Claire (Howard) and the “daughter” they have rescued, Maisie (Sermon), settled in their country home with endangered animals living on the property.  Maisie is a teenager and chomping at the bit to get out from under the protection of their home.  But knowing the keen scientific (and commercial) value she carries, Claire and Owen are torn between allowing her to satisfy her longings and keeping her safe from kidnappers.

Predictably, a giant corporation, Biosyn, has emerged as a major force in genetics research and commerce, headed up by Lewis Dodgson (Scott), with Ramsey Cole (Athie) and Ian Malcolm (Goldblum) on his staff, and Kayla Watts (Wise) as a contractor for supplying animals Biosyn is eager to acquire, and the only one contributing a bit of humor here and there.  But…hmmm…maybe Biosyn has some nefarious purposes…

All these characters end up on Biosyn’s property fighting for their lives after one or another major mishap occurs or threatening dinosaur(s) appear.  The filmmakers have done a good job in portraying the horror and terror in these scenes; it’s just that there are too many of them for my taste.

When Dune had a major sweep of Academy Awards for the crafts this past year, I was pleased because they well deserved the praise.  Will Jurassic World Dominion capture similar acclaim?  I think not, even though the filmmakers have appeared to go all out for technological flash.  The difference is that Dunehas a strong story line with many kinds of nuances and issues to grapple with, and although preserving animal species and partnering with nature is a strong theme here, I doubt it will achieve the same acclaim that Dunereceived.

It’s likely that most Jurassic fans will lap up the continuation of this franchise, but others less enamored may say, “Enough!”

An ongoing story that has difficulty measuring up to its prior versions.