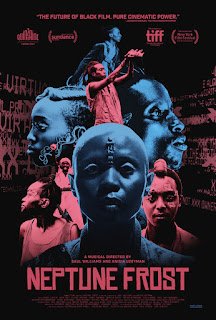 Multidisciplinary artist Saul Williams and Rwandan filmmaker Anisia Uzeyman have produced a sci-fi musical—an exotic, poetic collage—detailing the miners’ struggles in Rwanda in the early 1990’s.  The time period is after the civil war when the miners formed the Rwandan Patriotic Front (RPF) to resist the cruel Rwandan Armed Forces who had taken over control of the country.  It depicts exploitation of the workers by colonialist nations depleting Rwanda’s natural resources, and makes statements about capitalism, revolt by the oppressed, and their eventual liberation.

The film is intended to represent past, present, and future time, so is not a chronological account.  The narrator is a man/woman born into a coal-mining family who says, “My life was never quite mine”, as he/she tells the story of their lives and what happened to them and those around them.  Scenes of the miners working clearly illustrate what they are going through; for instance, when a young man pauses work to lift a rock to examine it, he is struck down by an overseer yelling at him to get back to work.  He ends up dead.

The movement takes form when some escaped miners meet in the mountains above Burundi to form a collective with computer hacking expertise as a way of disrupting the industry.  They sing, “These mo…..rs don’t want to back down.”  What ensues is the pairing of a coltan miner, Matalusa (brother of the slain man who picked up a rock) and an intersex computer hacker fleeing sexual harassment (the narrator) to seed a revolution.

Much of the music consists of chants such as “We mine, but we don’t own what we dig.”  “They use our blood, sweat, and tears to communicate with one another [producing technological products], but they have never heard us.”  “F…Mr. Google.”  But humor is sprinkled in from time to time.  The figure called Martyrloserking came from someone mispronouncing MLK’s name.

Whereas the film clearly makes a political statement, it truly is an artistic work such that summarizing it is like trying to summarize a painting.  Therefore, it is primarily for those who like to be absorbed in a work of art and use associations to it to understand it.

Opens June 24 in Houston at the Museum of Fine Arts.

An afro-futurist musical that will delight the senses and arouse conflicting emotions as it makes its political statements.