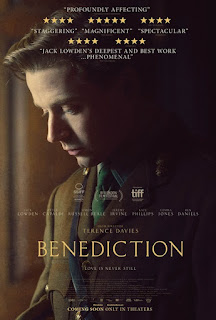 This is not your usual war story.  It starts out in London in 1914 with a poem about war written by Siegfried Sassoon (played by Jack Lowden as the younger and Peter Capaldi as the older), the protagonist whose life is chronicled beginning with his years as a young man when he and his brother are going off to WWI.  We see him three years later after his brother was killed and he has become at the same time a decorated British soldier and an anti-war activist, based on his “Soldier’s Declaration.” He is refusing to return to the battlefield on the basis that the conditions for peace have not been stipulated by government and the powers that be are guilty of “political errors and insincerities.”

He is fortunate (or unfortunate, depending on your point of view) in that a mentor with influence, Robbie Ross (Beale) sees that he is referred to a hospital for traumatized soldiers in lieu of being court martialed.  He is outraged by this “help” because he had wanted to publicize his protest.  Nevertheless, he concedes, and uses his time in a military hospital to develop more insight into himself with the help of therapist Dr. Rivers (well characterized by the script and performed by Daniels).

The plot takes a turn after Sassoon is discharged from the army and focuses on his life thereafter when he has acknowledged his attraction to men and becomes involved in ambivalent relationships with a number of them when, after a particularly painful period, he decides to marry a woman, Hester Gatty (Jones).

Writer/Director Terence Davies has created a moving and interesting work on the life of the poet Siegfried Sassoon, although he has chosen not to adhere strictly to historical accuracy.  Presumably his interest was more in the direction of illustrating the lives of homosexual men during that period of time not only in the military but in everyday social life as well.  And perhaps just as much to validate anti-war sentiments. His depiction captures the passion against war and the advocacy for freedom of identity, which could be seen as related causes.

Jack Lowden seems perfectly cast in the starring role, showing the interiority of the main character with subtle charm on the outside and depth of feeling on the inside, most particularly captured in the last scene.  Peter Capaldi as the older Sassoon with obvious bitterness and closed off emotions is aptly personified.  All the cast members are well chosen and help to give us a poignant impression of the people in Sassoon’s life.