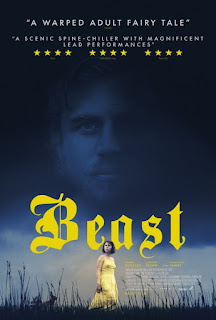 Beast is a nifty thriller that sneaks up on you, leading you to think it’s about a maladjusted young adult woman who is rebellious because of how her family treats her.  Moll (Buckley) is clearly a misfit at home as she was earlier at school.  At school because of a murky incident in her past, at home because she has been labeled as “all bad” and her sister as “all good.”  Her sister is beautiful and living what seems to be a charmed life, which makes it easy for her to be charming.  On the other hand, Moll has more depth, is difficult to understand, and always looks as if she is hiding something—all of which combined makes her an easy target for others’ projections.
For Moll’s birthday, her mother (James) has organized a big party, which Moll is enjoying, until her sister preempts it with the announcement that she and her husband are expecting twins.  The spotlight pivots in that direction (apparently something that has happened all too often in the family history), and Moll shrinks away.  She leaves the party, walks on the beach, and goes dancing at a bar until morning.  When she is walking toward home, she is waylaid by a man she was dancing with earlier, who pressures her to continue partying.  She is having trouble getting away from him when suddenly another man with a gun appears and chases him away.
This is Pascal (Flynn), who immediately gives her the kind of attention she has craved all her life.  He seems to understand her without knowing much about her, boosts her self-esteem, and is funny and charming.  The problem is, he’s not in the same social class as Moll, and when he meets her family, her mother is disdainful.  But Moll and Pascal seem to have a special empathic connection with one another, perhaps because he is a current suspect in local murders, and Moll was once charged with threatening a fellow student.
The beauty of this picture, written and directed by Michael Pearce, is the way in which this empathy between the two plays out over time.  The filmmakers keep the viewer in suspense until the very, very end of the story.  Buckley gives an artful performance in portraying a resentful, troubled woman, and Flynn is the embodiment of a male protector with the ability to sense whatever is needed and provide it with charm and sincerity, in an oily kind of way.
Beast offers an entertaining, suspenseful ride that will keep you engaged while it touches on deeper psychological yearnings that make a person vulnerable to influences which may lead down a garden path…or may prompt surprising, decisive action.

Beast is a thriller with intelligence and creativity behind it.