POPE FRANCIS: A MAN OF HIS WORD 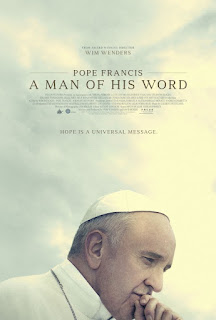 Wim Wenders, writer with David Rosier and director of the documentary, shows from his speeches all over the world how Pope Francis is a man of his word. He is the only pope taking the name of Francis, inspired by St. Francis of Assisi who took a vow of poverty and spent his life working for the common good.  Pope Francis models his life after the saint, eschewing a luxurious apartment in the Vatican, using a modest car, living frugally, and consistently advocating for principles that most religions embrace, but appear to have forgotten.
The film is very well executed; Wenders made a wise choice in making most of the film showing the Pope, who is an inspiring speaker, addressing multitudes or talking only to a few.  Cinematographer Lisa Rinzler artistically frames the locations, captures the expressions of hundreds of faces, sometimes tucking pictures of St. Francis into a modern-day scene.    Laurent Petitgand’s music likewise incorporates a range of musical genres, with religious themes more prominent, of course.  Wenders’ narration from time to time is excellent and succinct in commenting on scenes and summarizing the Pope’s aims and values.
The sheer number of weighty subjects in the forefront of the Pope’s mind is impressive, and they clearly reflect his religious beliefs and close connection and communication with people from all levels of society.  We see him with world leaders (Presidents of the U.S. and other countries), but mostly with people who have come to see him and touch him when he travels around the world.  He may single out a nun whom he knew long ago in Argentina; he has children take the microphone and ask him questions about why he wanted to become Pope and why he doesn’t live in a luxurious apartment and drive a fancy car (his answers are beautifully instructive and respectful of the questioners); he listens most attentively to all who speak with him and unhesitatingly reaches out to them with his hand or with a pontifical kiss; he practices what he preaches in terms of listening and responding empathically.
Pope Francis is keenly aware of the world’s problems, and addresses them repeatedly in his speeches.  Foremost is what we are doing to Mother Nature, and our indifference to the amount of poverty and joblessness that surround us and to the hordes of immigrants who are seeking a better life.  Diversity is something good that helps us grow (even though we become anxious when faced with differences); we need to build bridges instead of walls.  He also feels strongly about arms control, making children a priority, and zero tolerance for pedophilia.
One of the most moving sequences is when Pope Francis addresses both houses of the U.S. Congress and more than one legislator can be seen brushing a tear away.  This is a perfect illustration of his power in the sense of inspiring, educating, and hopefully motivating his listeners toward sound principles of living.  Francis has been an activist pope in certain ways, such as taking an ecumenical view in respecting all religions, preaching for equality (between men and women, rich and poor, and everyone), and refraining from condemning homosexuality.  He firmly believes that God gave us freedom to make choices, the most valuable of gifts.

A finely executed picture of perhaps the most inspiring, noble, but humble, leader of today.


Posted by donnarcopeland at 8:25 AM