LIFE OF THE PARTY 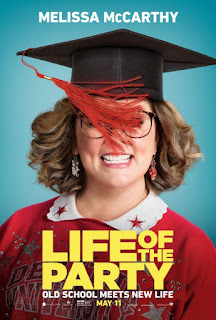 Life of the Party is pretty much in the same vein as other Ben Falcone/Melissa McCarthy creations, such as Tammy andThe Boss, and McCarthy’s films in general (i.e., This is 40, Identity Thief, and Bridesmaids).  In these, her character is buffoonish, destructive, and slapstick funny, with the emphasis on slapstick.  Here, I suspect that the husband-wife team (writers, with Falcone being the director) envisioned something different, in that McCarthy’s character has a few more redeeming characteristics (sympathetic, tolerant, with higher aspirations), and she isn’t quite as spastic (falling spectacularly again and again).  However, they couldn’t seem to resist inserting a couple of scenes where she does end up on the ground in one, and is completely destructive in another.
The story opens with Deanna (McCarthy) and her husband Dan (Walsh) taking their daughter Maddie (Gordon) to college and dropping her off at her sorority house. Dan chooses this time to drop a bombshell, and Deanna is suddenly thrust upon her own devices.  As is typical for someone in this situation, she looks back over her life and decides to reverse a fateful decision she made earlier in life, to drop out of college in her senior year.  She will enroll and complete her studies to earn a degree.
There is one hitch in this—she’s returning to Decatur University where her daughter is. From here, Falcone and McCarthy weave a fanciful story that is not likely to happen here or on any planet in the universe.  That is, “Dee-Rock”, as she will now be called, becomes a hit on campus, with the total support of her daughter and her classmates and even the whole university!
If you can buy that, I’ve got a bridge…
For years, I have been hoping that the talented McCarthy would reprise the career path that she started in Spy, which showed her talent as an actress in portraying an intelligent, strong woman who could be calculating and crafty.  When I interviewed Paul Feig, writer/director of Spy, he described her as “one of the funniest on the planet…She’s also like your best friend…not intimidating.”  His goal was to make Spy feel real, and McCarthy met his expectations.  She has not been in such a good movie since.
Light comedy can be fun, and the kind of humor in Life of the Party certainly makes money, but I have a problem with its scenes written to draw laughs:  meanness of female college students, unwitting consumption of chocolates laced with marijuana resulting in destruction, college women not being able to do simple math, etc.  The whole premise that college students would be so accepting and supportive of the McCarthy character is far-fetched, let alone the idea that it’s a reasonable thing for a mother to be college friends with her daughter. Wha?....
McCarthy is good at bringing this character to life; she is appealing, funny at times, heart-warming at times, and even sensible at times.  But how I wish she would move on to more substantive roles.  I would love to see her branch out into a strong dramatic character; she could do it!
Supporting actors, such as best friend Christine (Rudolph) and daughter Maddie (Gordon) are great, but to me, the one who steals the show from others is Heidi Gardner as Deanna’s Goth roommate, totally neurotic, always deadpan, but with a soul.  She is so refreshing as a new kind of low-key character who whose demeanor and dialog makes you chuckle.

Melissa McCarthy in nothing new under the sun.