HOW TO TALK TO GIRLS AT PARTIES 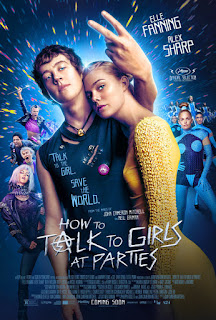 Don’t let the title mislead you; this is not a “how-to” (except maybe as irony) lesson, but one of the weirdest movies you are likely to see.  It starts out with three punks careening on a single bike on the streets of London circa 1977, then it goes to a loud punk-rock concert and eventually evolves into an alien cult doing what looks like performance art, but is much more than that.  The three punkers take pride in their weirdness, and groove away at the concert.  When they aren’t invited to the after-party, they seek it out to crash it.  Mistaking it for the after-party, they come upon a truly weird group doing what looks like a performance art thing.  But the first clue is that they all belong to certain colonies that are fundamental to their society.
The three punks are adept at crashing concerts and parties, and when a sexy woman answers the door, one of the punks, Victor (Lewis), uses his flirty charms to get her to escort them in.  They go their separate ways, seeking to score, and Victor begins following through with his line at the door to his greeter; his reaction to what happens after that is just one of the comedic elements of the film.
John (Lawrence) finds his place singing and dancing, but Enn (Sharp) connects with Zan (Fanning), who is extremely alluring and interesting.  He tells her about his band, “Virus” (attempting to infect everyone to fight fascism and conformity), and she is fascinated. Before he knows it, she has invited herself to his “punk colony”, using an odd phrase (“How do I further assess the punk?”), and saying something about having 48 hours to learn more.  By this time, nightlife has closed down, and Enn must take her home, where she meets his mother the next morning and visits his “tree temple” (tree house).  As time goes on, it becomes obvious that Zan is very different from Enn and his British mother, although they get along beautifully. (Enn’s mother thinks she is from California!)
At first, I wasn’t sure I could sit through this film, but after it began to appear to have some meaning behind it, I got interested and was greatly entertained by the action, sets, costumes, and story.  But it has a message as well—about the importance of staying connected with one’s roots (family) and discussing parent-child relationships (Are you going to “eat” them, or allow them to go when they’re ready?).
I think this movie is intriguing as well in the way it presents us with something shocking, then seduces us into appreciating and valuing differentness in culture and ways of being.  Nothing is static:  “Adapt or die” is its message, and shows that in the process of adapting, seemingly miraculous things can transpire.
Elle Fanning is superb as some kind of being that is seeking out new experiences and answers to life’s questions, and Alex Sharp is a worthy co-star who shows his character being awed, but still willing to go with the flow.  I haven’t mentioned Nicole Kidman (Queen Boadicea), queen mother of the punk Dyschords, but she measures up to her Eyes Wide Shut performance, extended several octaves.
The ending of the film seems alien (pun intended) to the story we’ve just heard—that is, it’s pretty standard Hollywood-ish compared to the rather bizarre scenes that go before.  It is effective in bringing us back to reality after an out-of-this world surreal experience.

A taste of punk as it is being introduced in London in the 1970s.

Posted by donnarcopeland at 9:43 AM